WHAT DOES A STUDEBAKER & BEING A FIDUCIARY HAVE IN COMMON?

WHAT DOES A STUDEBAKER & BEING A FIDUCIARY HAVE IN COMMON? 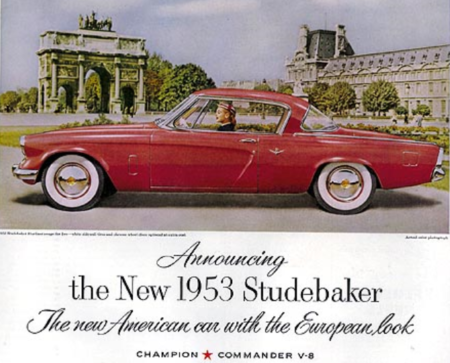 Quite a bit actually!  Who would have thought!

This past weekend I attended the international car show in Manhattan.   I guess you can say I’ve got cars on the brain, but I had no idea that one car, in particular, made such an impact on the retirement plan industry.

Studebaker was in business for 114 years.  It began as a blacksmith shop in South Bend, Indiana in 1852.  They manufactured horse-drawn wagons during the Civil War.  Automobiles came many years later, with an electric car in 1902, and gas-powered cars in 1904, although they didn’t start selling gas vehicles under their own name until 1913.  They still made horse-drawn wagons during this time too, until 1920.

Studebaker was hit hard by the Great Depression and filed for bankruptcy protection in 1933 (the only other car maker to file for bankruptcy is Chrysler, 76 years later in 2009).  New management helped Studebaker get back on track.  It enjoyed success for the next few decades with the creation of the 1953 Starliner and the 1963 Avanti Sport coupe.  However, by the 1950s, Studebaker was facing financial hardship once again.  They closed their doors in America for good in 1963.  Thousands of Studebaker workers and retirees lost most, or allof their accrued pension benefits.

What happened to the Studebaker workers became a battle cry and symbol for pension reform.  Their shutdown, along with the United Auto Workers (UAW) union, helped catapult the debate for pension reform into the legislative arena for the next decade.  During this period, there was also substantial media coverage on the topic and on September 12, 1972, NBC News aired a television broadcast entitled “Pensions: The Broken Promise.”  This program shed light on the consequences of poorly funded pension plans and brought the issue home to Americans across the country who watched.  All of these events led to the birth of a new law designed to prevent another pension disaster like Studebaker and to protect the pensions of millions of hard-working Americans.

The Employment Retirement Income Security Act of 1974 (“ERISA”) was signed into law on September 2, 1974 (Labor Day) by President Gerald Ford.  It became effective on January 1, 1975.  Of course, ERISA has been amended several times since then, but at its core, its purpose remains intact; to regulate the operation of a pension plan.  ERISA imposes a set of fiduciary duties on those responsible for the administration of an employee benefit plan.  Specifically, plan sponsors/administrators, employers/business owners, investment committees, board members, trustees, CFOs, CEOs, and anyone else that has decision making authority on a retirement plan.  ERISA also gives authorization to the Department of Labor (DOL), plan administrators, plan participants, and their beneficiaries, to bring legal action against a fiduciary for a breach of fiduciary duty.  If found guilty, civil and/or criminal penalties may be imposed.

The word “fiduciary” comes from the Latin word “fiducia” meaning “trust.”   A fiduciary has a duty of loyalty and a duty of care.  A fiduciary duty is the highest standard of care and is not to be taken lightly.  Simply put, being a fiduciary is a big deal, it matters, it really, really matters.

With so much at stake, it is vital that all fiduciaries understand their roles, responsibilities and what is expected of them, as well as the risks, exposure and personal liability that comes with it.  It’s not just about them, it’s about the workers and employees who count on them, a truth that gets lost most of the time.

Whether or not the DOL Fiduciary Rule fades into the sunset, ERISA is here to stay.    ERISA Law is what regulates a Plan Sponsor’s or Fiduciary’s actions.  ERISA Law is what Plan Sponsors & Fiduciaries should be concerned with.  Most, if not all, of the 401(k) lawsuits stem from breaching fiduciary duties that are set forth in ERISA Law.  To be clear, I’m in no way suggesting that the DOL Fiduciary Rule isn’t important, I just want to make sure that ERISA Law is not overlooked or overshadowed.

If you’re a fiduciary and not sure what your duties are, or whether you’re fulfilling your duties, what you’re liable for, or what happens if you breach your fiduciary duty, I strongly encourage you to attend one of our upcoming lunch and learns.  They’re always free and specifically designed to provide education for fiduciaries and to help fulfill your duties.

Priority Pension Services, Inc. (AFI) is a full-service employee benefits consulting, actuarial, insurance and third-party administration (TPA) firm.  We specialize in providing education to Plan Sponsors & Fiduciaries.  We’re happy to help any way we can.  Please don’t hesitate to contact me on Linked In, email (ginam@ppsafi.com), or direct: 516-584-2755 for information on one of our upcoming events or with any questions.