Caddyshack II is the worst sequel of all-time

Caddyshack II is the worst sequel of all-time 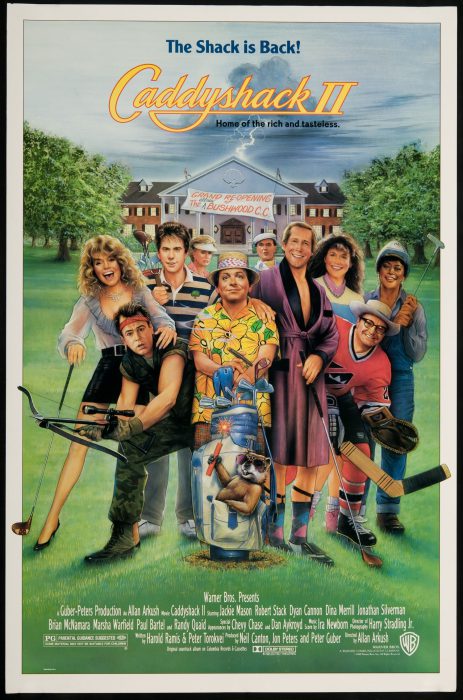 It’s hard to believe but I didn’t have cable in my Brooklyn home until 1989. So until that time, we had HBO where it was connected to the back of the television set with a simple switch so we could watch it on Channel 6.

In 1981, HBO premiered Caddyshack. Like the movie Airplane!, I was laughing so hard even though I got about half the jokes. Caddyshack was an amazing movie because it was essentially a movie hijacked by the improve antics of Rodney Dangerfield and Bill Murray when the movie was originally supposed to be structured about Michael O’Keefe’s Danny Noonan character and the other caddies (hence the name of the movie).

As a kid, I really didn’t know that most movie sequels stink. I watched Smokey and the Bandit Part II before the first one and loved the sequel more. So I was always pining for a second Caddyshack and when I heard there were talks for a second one, I was holding out hope for a masterpiece. My hopes for a masterpiece was dashed when Rodney Dangerfield got into a tiff with Warner Brothers and backed out. Bill Murray didn’t want to do it, Ted Knight was dead, and Chevy Chase was only interested in a cameo as Ty Webb.

Why is Caddshack II the worst sequel of all time? It’s because it’s just a rehash of the first movie with far less interesting characters. It’s the snobs versus the slobs again. Jackie Mason isn’t as funny as Rodney Dangerfield. Robert Stack replaced Ted Knight as the head snob and the reason Stack was in Airplane! was because of his wooden, deadpan delivery that is great for a spoof and not so great for a comedy. Jonathan Silverman has a version of the Noonan character, but he far less interesting and not much of an underdog that you’d care about or root for. Dan Ackroyd was cashing his checks by playing a character who’s supposed to kill Jackie Mason, but is sidetracked by the gopher (a poor imitation of Murray’s Carl Spackler). Chevy Chase’s character of Ty Webb is in the movie for about 5 minutes at the beginning and at the end, it’s like he phoned in his acting, as Ty is now some sort of spiritual golf guru with a mansion and nothing to do.

There are some new characters. Randy Quaid is a crazy lawyer, not far off from his personal life as a crazy actor. Marsha Warfield s a construction worker with the same attitude as her bailiff character on Night Court. Chynna Phillips plays a snooty slob which explains why she immediately went into a signing career with the Phillips girls. Dyan Cannon took time out of a Lakers game to play Jackie Mason’s girlfriend. Jessica Lundy plays Jackie Mason’s daughter, Kate Hartounian who is embarrassed by her father, just like the entire audience was.

The movie is a hot mess and the only time I laughed at the movie was in the end when Ackroyd gets shot in the rear end by a poisoned arrow and he ask Chase to suck the poison out. One laugh for 90 minutes is not a good score for a comedy.

I’ve seen some really awful sequels like Beyond the Poseidon Adventure, Meatballs II, and Major League III and Caddyshack II is the worst sequel of all time because it recycles the plot from the first movie with less interesting characters. It’s so bad that Harold Ramis who co-wrote the first one and directed it had disavowed even though his name was still on the script. That’s bad.