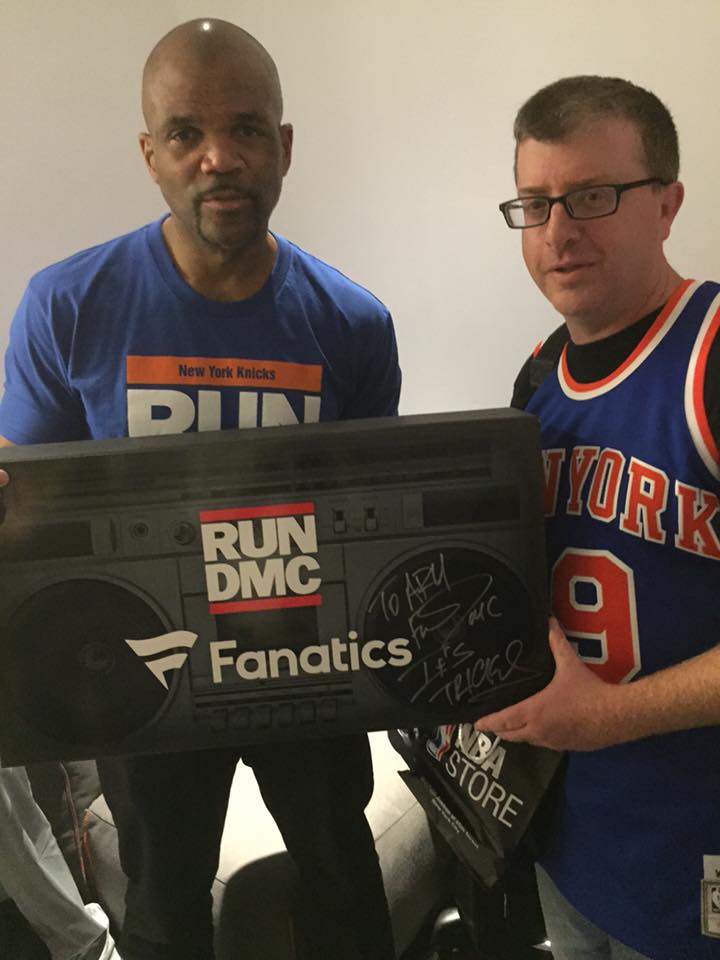 I shop a lot at Fanatics.com for Mitchell & Ness jerseys, Mets gear, and Clippers gear. Fanatics is the official online store for the NBA, NFL, NHL, Major League Baseball, and NASCAR. My 11 year old knows Fanatics thanks to their large souvenir tents at NASCAR races.

So I got invited as one of their Rewards members to be a VIP guest at the NBA Store to meet Run-DMC member Darryl McDaniels as Run-DMC and Fanatics launched an NBA line of clothing inspired by the brand’s logo. I jumped at the chance, it’s not every day you meet a Rock and Roll Hall of Famer.

Everyone talks about the impact of NWA and having a great autobiographical movie, Straight Outta’ Compton. It also helps that Dr. Dre and Ice Cube are still icons on the music scene and for Ice Cube, a movie powerhouse. Run-DMC in my mind had a greater impact on the musical scene than NWA because they were able to crossover into the mainstream with their version of Aerosmith’s Walk This Way.

I had the pleasure of seeing Run-DMC open for Aerosmith at Jones Beach in 2002 and I think most people know how much of an Aerosmith fan I am. When I met Darryl, I told him what a big fan I am of his music and I told them that without covering Walk This Way, Aerosmith would probably be appearing at some music lounge. Darryl laughed, but when Run-DMC cut the song with help from Steven Tyler and Joe Perry, based on a suggestion by producer Rick Rubin, Aerosmith was down and out. Aerosmith had gotten back together two years earlier and their latest album couldn’t break platinum. Walk This Way became a hit, peaking at #4 on Billboard and the video became an MTV staple. It was the spark that got Aerosmith to kick their drug habit, concentrate on music, and start one of the greatest comebacks in music history.

However, this isn’t about Aerosmith. Run-DMC are cultural icons because their crossover into the mainstream allowed for great acceptance of rap and hip-hop. Would NWA breakthrough without Run-DMC crossing over? Probably not.

Whether you like rap or not, Run-DMC are cultural icons and don’t get enough of the credit they deserve for what they did for musical history.

Many thanks to Fanatics and their Rewards program for a great event.