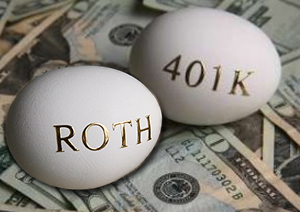 401k plan participants often wonder whether they should contribute their hard-earned money to a Roth 401k or a pre-tax 401k account. Depending on their age and tax bracket, the answer may be both!

Pre-tax 401k contributions (and the associated earnings) are taxable when removed from a 401k plan. I have found that 401k participants are generally unclear on how they should choose between these two options. Following are some thoughts.

Most economic experts would agree that both state and federal tax rates are probably at historic lows. Regardless of whether you believe that is true, it is hard to imagine that tax rates will be lower in 10 years than they are now.

The answer
Both. Recent research indicates that because of the uncertainty surrounding future tax rates, most 401k participants would be wise to contribute to both regular pre-tax 401k and Roth 401k after-tax accounts.

Some participants tell me that they are leery of making any Roth 401k contributions because they don’t believe that the government will continue to allow for tax-free withdrawals at retirement. Michael Kitces recently wrote a great blog piece about why he thinks the Roth promise will stick. And he is very convincing.

He believes that one of the biggest reasons the federal government will keep its Roth promise is because unwinding it and taxing balances does not produce enough tax revenue. All revenue-raising proposals are now scored by Congress on their ability to produce revenue. Taxing Roth balances just doesn’t score highly enough. The second major reason that Congress won’t go back on its promise, according to Kitces, is that breaking it would hurt older folks and retirees the most. And older folks vote!
If you accept that state and federal tax rates could vary wildly over the next 30 to 40 years, that the government will keep its Roth promise, and that the best strategy is to contribute to both accounts, then the final question to answer is how much participants should contribute to each account.

What participants should do
Age has a significant effect upon the percentage split between each account, as does income level. Consider these recommendations: