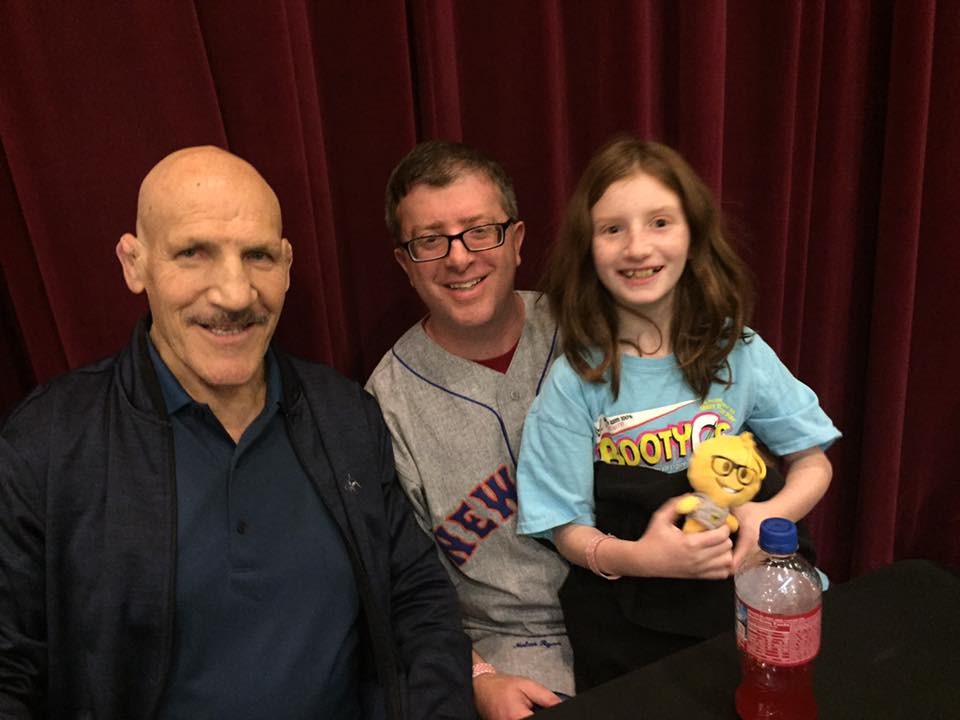 I’ve been a pro wrestling fan for the last 30+ years and I have to be honest, I never had a real interest in going to a wrestling convention. Once I met Bret The Hitman Hart and Stone Cold Steve Austin years ago, I really didn’t have interest.

However, my daughter Meredith drags me to these things. So every six months, I attend the Big Event convention at a hotel near LaGuardia Airport. While she does drag me, it was cool a couple of years ago to see Dusty Rhodes, just months before he died and I was a huge Dusty fan.

I think many of you have this notion of what a wrestling fan, but wrestling fans come in all shapes and sizes. You got people dressed up as wrestlers, some with their own championship belts, and the fans run the gamut as far as the human species are concerned.

The draw of the convention a few days back was Bruno Sammartino. Bruno is claiming this was going to be his last public signing. He’s 82, so any signing could be his last. However, he looks like a million bucks and seems to be in great shape. As far as farewell things go, there are no real farewell tours until someone dies. I recall not buying tickets to the Kiss Farewell tour in 2000 and they still tour today.

Sammartino was the headliner, but there were appearances by Kevin Nash and Scott Hall, as well as former WWF Champion Bob Backlund. Former NWA Kingpin Harley Race was a late scratch as was WWE star James Ellsworth who just signed a full time contract. Since I had tickets for Race, I opted to trade them in to meet former Olympian Mark Henry.

The convention is held at a hotel that really doesn’t have the space to hold it. Most of the wrestlers show up in a ballroom ill-suited for such a crowd. That becomes obvious when you see the line for Kevin Nash and Scott Hall snake around the tables including Bob Backlun.,

We had tickets for Bruno Sammartino and I figured it was best to deal with the tremendous line at the end and find some of the wrestlers around the ballroom. The problem with these shows is that it’s usually $40 to get an autograph and a photo. With a limited budget, there are some wrestlers you’re going to have to say no to. I always pass over Greg Valentine and I saw Ivan Koloff last time. There are some wrestlers that I’m not even aware of because they wrestle currently for some of the independents. I had zero interest in meeting Vickie Guerrero. I didn’t see Bobby Heenan because Bobby has had so many surgeries dealing with his cancer that he can longer talk and he’s just a sad sight to see even with his wife sitting down and helping him out.

Meredith wanted to see Hornswoggle who is a midget wrestler that was in the last Muppets movie. Also, her favorite wrestler, Rikishi was there. Rikishi is her favorite because of his stink face finisher when he’d rub his large behind into the face of other wrestlers. I had a laundry list of people who I wanted to see. Guys like Ted DiBiase, Jake The Snake Roberts, King Kong Bundy, Nikolai Volkoff, and Hacksaw Jim Dugan were on my list. We’ve seen Bob Backlund before, so we got another photo. While we waited a long time for a Scott Hall and Kevin Nash, I got to see Baron Von Raschke and Larry Zybysko because I used to get to watch the AWA when they had a slot on WPIX TV.

In terms of conventions, it’s a great value to see so many wrestlers, but those lines for the top stars can be a pain and they seem to be poorly managed when VIP ticket holders can just cut the line on a whim. We waited 80 minutes to see Bruno Sammartino and it was worth every minute to see someone that I know my late grandfathers used to watch wrestle. Bruno was pretty much semi-retired when I watched, but I knew the significance he means to wrestling and WWE history, I told Bruno how it was a pleasure to see him because he was a favorite of my grandfathers and I told him that whatever he does to make himself look so young, he should bottle it, and sell it.

I maybe a few hundreds of dollars poorer, but Meredith had a great time and I have a pretty cool selection of photos