Some people can’t deal with complaints, but….

Some people can’t deal with complaints, but…. 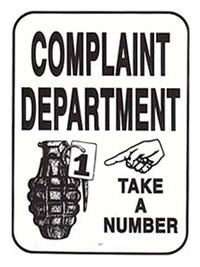 The one thing I always say about third party administrators (TPAs) is that they get none of the credit and all the blame. What that really means deep down is that people complain about services, but are rarely complimentary when it’s good.

I try to give compliments to service providers and businesses when transactions go smoothly. I have a long fuse, but when it gets lit, but does it blow up. The problem is that many companies and individuals deep down can’t deal with criticism.

It reminds me of the time when I was working for the college paper and there were lots of typos (like my writing today). We’d work 10 hours twice a week to put out a paper in a rush and there wasn’t time or staffing for copy editors. So a reader sent a letter complaining about the editing and while I adored my editor, she was 21 and was sensitive. So in retort, she mailed the complainer copies of all of our awards from Newsday which proved nothing. My daughter has been going to the same camp for 6 years and I was always complimentary about the place until this year when their salaried photographer was focusing their duty on taking pictures of her kids. Rather than say they were looking into it or trying to sooth my complaints, they did nothing and one of the people there was complaining that I was harassing them. Listen, when I, harassing you, you’ll know it because it’ll be in the newspaper.

I believe that while, you should be careful with your criticism, you don’t need to censor it completely. You should be passive-aggressive and let people know how you feel so it comes as no surprise when you make a change because the service is still substandard. People can’t deal with complaints, but the worst thing you can ever give people are false praise and false hope. Life is short, you do need to pick your battles but there is enough competition in the marketplace for your money. If you’re not satisfied with what you’re getting, let your provider know. Just deal with the fact that they may not want to hear it.