The Sadness That Is Artie Lange

The Sadness That Is Artie Lange 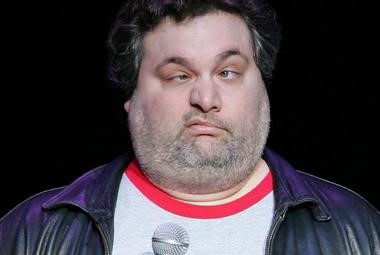 Artie Lange should have had it all. He replaced Jackie “The Jokeman” Martling in 2001 as the comedian occupier of the “Jackie chair” on The Howard Stern Show. Artie is estimated to have made $750,000 annually on the show and $3 million doing standup on the road because of the fame on the show as well as a bestselling book. Too Fat to Fish. Then on January 2, 2010, he crashed and burned. Artie attempted suicide by drinking bleach, slitting his wrists, and stabbing himself in the abdomen 9 times. Depression and a heroin addiction are terrible things.

When Artie tried to kill himself, there was a news blackout on the Stern show. It was only until the news of his attempted suicide was leaked to the New York Post, did Howard Stern address it. Not much was said except that he hoped that when Artie recovered, he’d be back on the show. Artie Lange has never been back on the show since even when he wanted to plug the book detailing his suicide attempt, “Crash and Burn”. While Artie has claimed that he understands why he’s not back in the Jackie chair, he’s made conflicting statements about his relationship with Howard and has consistently been bashing the turn that the Howard Stern Show has been taking since he involuntarily left. Artie is not a fan of the way the show has transformed with the coincident arrival of Marci Turk in running the Howard Stern “brand”.

As a fan, I loved Artie and would love for him to return to the show. When it was clear that Artie was not coming back again even after he recovered, I felt that I was being lied to as a fan. However as an attorney, who knows one or two things about employment law, I can understand why he won’t ever be back and I really can’t fault Howard for that. The story that they were going to let Artie come back to the show was for two reasons: 1) to publicly state something for Artie to live for and 2) avoid liability by terminating someone with a disability (depression). They weren’t going to fire Artie, they were just going to wait for his contract to expire and quietly not renew which is likely at the same time that Howard’s first contract ended with Sirius in December 2010.

Artie was using heroin and it was completely affecting his work. Artie would fall asleep on the job and was belligerent with his co-workers, attacking Sal Governale and his assistant Teddy. People get fired for less, I know that first-hand. I understand Artie’s anger over his dismissal and his consistent attacks on Howard, just like I have used many columns to bash the law firm I used to work at. The difference is that Artie wants to be back at the show and leaving that law firm involuntarily was the best thing that ever happened to me. Artie’s attacks on the show and the attacks on Howard are traced to the fact that his career has certainly hit the skids. He’s not making the mint he did doing standup, he’s not playing Carnegie Hall anymore. Artie’s show with Nick DiPaolo on Direct TV only lasted a handful of years and his current podcast has about 10,000 subscribers.

I understand Artie’s hurt feelings that Howard stopped contacting him and is clearly no longer a friend. Howard shows his narcissism on the air every time he puts down something he doesn’t understand (e.g., vinyl, boff?), he’s not someone who has empathy. Howard doesn’t have relationships with people who left the show voluntarily (Billy West and Jackie Martling) and involuntarily (the Howard TV gang) and some of these people are people who worked for him for 20 years. Howard’s first marriage that lasted 20+ years apparently ended because Howard wanted to stay in the basement all the time and not go out. This is the frostiness that is Howard Stern and despite all the therapy, that’s not going to change. He’s not going to watch Survivor with Sal in his apartment; he’s not going to have a relationship with Artie. Howard is uncomfortable with the fact that Artie was using heroin and Howard had no idea, that’s what it’s really all about.

I’ve seen the recent photos of Artie. Artie is 5 years older than me and looks like my father. He looks so old and so fat; you think he’s the next John Belushi or Chris Farley. There was much sadness in them, just like there is sadness in Artie. I’m just hoping for a different ending.