The Shawshank Redemption and Hope

The Shawshank Redemption and Hope 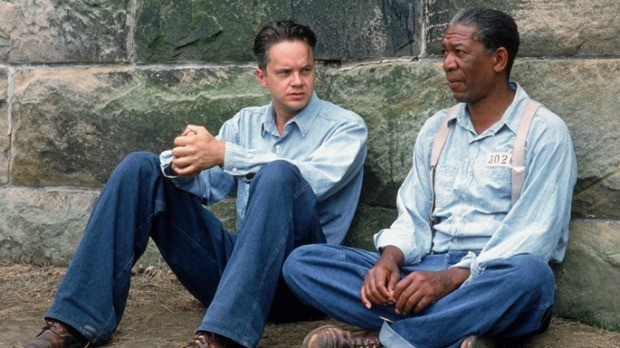 My favorite movie is Airplane!, but I will say that the movie that has had the most profound movie I’ve ever watched that affected my life is The Shawshank Redemption.

The movie came out around the time I started law school and I think that movie got me to survive three years of law school and many of the challenges I faced in my legal career.

When I was at law school, I studied and went out on the weekends with my friend Ron where we’d go to a movie or shop in Northern Virginia, I didn’t make too many friends despite working for the law school a magazine and eventually becoming the top editor in my final year of law school.

One thing I had was one of those TV/VCR combos because I loved movies. In my second year of law school, a new shopping center was built and a Hollywood Video opened up. Hollywood Video was a video rental store and I say that because most people forget in a Netflix world.
I liked Hollywood Video better than Blockbuster because it cost less, had longer time rental periods, and I could get there by the American University bus, I’d watch 2-3 rentals a weekend that including anything starring Clint Eastwood and films of the 70s like The Deer Hunter and Martin Scorsese films.

People forget that when The Shawshank Redemption came out in 1994, it was a flop and people blamed the name for it. It had rave reviews and in an injustice that will stand the test of time, Shawshank and Pulp Fiction lost Best Picture to Forrest Gump. I like Forrest in 1994/1995, but I dare anyone to watch it today and not laugh. I remember watching bits and pieces of Shawshank because in Brooklyn, my parents had one of those cable boxes where you could see all the Pay Per Views for free and that movie was on all the time in the summer of 1995.

Law school wasn’t easy for me especially that second year of law school. I wrote twice for the law journal competition and failed twice. I didn’t make the tax law clinic because my name wasn’t picked out of a hat and my grades weren’t so great. I never thought of dropping out, but entertained thoughts that I would never practice law after graduation.

Shawshank is about prison but it’s really about not letting something like prison take a hold of you. One of the most important scenes for me is when Andy gets thrown into solitary after playing opera over the loudspeakers. What kept him going was that he heard the music during solitary. Now the other prisoners thought they might have allowed him to bring the record player into the hole with him, Andy said that he heard the music in his mind. Andy tells Red that the beauty of music is that prison can’t take it away from you and that there are certain things that they can never take away like hope.

Shawshank Redemption is about hope and that hope is a good thing, a very good thing. What got me through law school was the realization is that I had hope I’d get through it and graduate, law school can take so much out of you and I’m still a little bitter about the experience, but I never let it change who I was. Morgan Freeman’s character Red summed it up best when he said that some birds aren’t meant to be caged and since Andy was innocent of murdering his wife, it was a sin to let him stay there. So to spoil it for you, Andy escapes and he eventually reunited with Red at the end of the movie when Red is finally paroled.

To counter Andy, there is the character of Brooks Hadley who is an old time inmate who is eventually paroled. Brooks is elderly and all he knows is the way of prison, he doesn’t even want to leave. When Brooks gets a job working at a supermarket, he’s too old for the job and he can’t handle life on the outside especially when he was last free, there weren’t many cars on the road. Brooks desperately wants to go back to prison and after inscribing Brooks was here on the wall while he’s standing on a chair, he hangs himself. When Red gets paroled, he gets the same job as Brooks and ends up in the same boarding room. Red has the same thoughts as Brooks, He inscribes Red was here too next to what Brooks had wrote. Instead of killing himself like Brooks, Red decides to break his parole and seek out Andy in Mexico after all the hints Andy dropped after breaking out of a prison, Red adopts Andy’s views on hope and shows that prison couldn’t take everything away from him the way it did from Brooks.

Law school was a bitter experience, so was working for a law firm where I tried to build a national practices and was stymied after every turn, but I never let those terrible experiences define who I was or take away the hope from me that things would be better. For a moment or two, I let law school get me in the way of deciding whether I’d practice the law or not. When I graduated, I realized I could be a pretty decent lawyer and not let that law school experience define who I was. Some birds aren’t meant to be caged and some lawyers aren’t meant to be law firm associates. Some law school students aren’t meant to love school. These are the things that I take from a movie that still inspires me today,