2016 was brutal when it came to celebrity deaths

2016 was brutal when it came to celebrity deaths 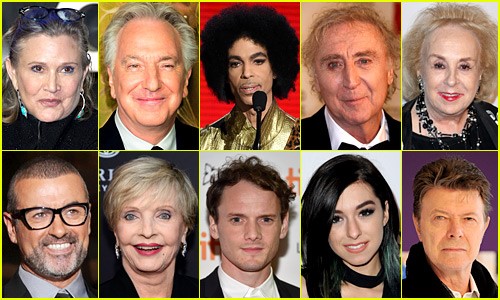 Here’s a sad fact: like people, celebrities die too. So every year, and awards show will have the beautiful memorial montage of those that we lost and people will nitpick as to which one was snubbed in the montage. However, when it comes to celebrity deaths, I can’t remember how many deaths there have been that have been untimely and had an impact on my life. This isn’t about 90+ actors or musicians who grew old and died, 2016 killed off a lot of celebrities who still had so much to give to us all. As a child who grew up in the 1970’s and 1980’s, 2016 killed off many celebrities that have touched my life.

Most of those on the list went way too soon and each of them was a cultural icon. Carrie Fisher was one of my first celebrity crushes, the greatest concert I ever saw was Glenn Frey and the rest of the Eagles, and Gene Wilder was in two of my favorite films as a kid (Blazing Saddles and Willy Wonka). I loved the music of Prince, Bowie, and Cohen. Muhammad Ali was one of the greatest sports icons of the last 50 years. It’s just amazing how many people who made up the tapestry of my generation, all died within a calendar year.