Walter O’Malley was no villain; he was a genius

Walter O’Malley was no villain; he was a genius 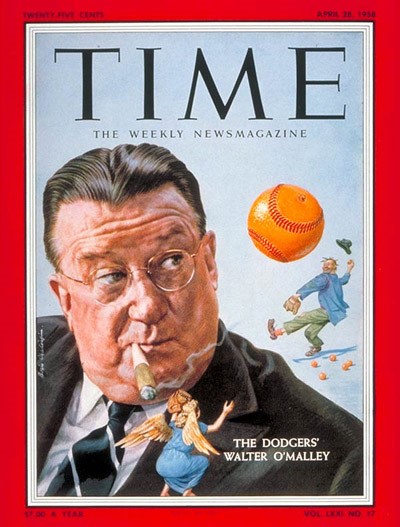 I grew up in Brooklyn and I was born 15 years too late for the Brooklyn Dodgers. The Brooklyn Dodgers moves to Los Angeles in 1957 and Walter O’Malley became the biggest villain in Brooklyn history for breaking the hearts of millions of Dodgers fans. It’s that hatred that probably cost O’Malley enshrinement in the Hall of Fame during his lifetime, it took 29 years after his death to get elected.

While O’Malley is equated in Brooklyn with Stalin and Hitler, he did try to keep the team in Brooklyn. As much as people love Ebbets Field in their memories, the ballpark was falling apart and like every sports team owner, O’Malley wanted new digs for his team.

O’Malley wanted to build a new stadium at Flatbush and Atlantic Avenue near the Long Island Railroad station and pretty much where Barclays Center sits now. It was going to be a domed stadium way before the Astrodome was built. The problem is that the most powerful man in New York, Robert Moses fought against it. Robert Moses had this desire to develop Flushing Meadows Park in Queens and wanted the stadium there. Since they were the Brooklyn Dodgers, O’Malley didn’t want a team in Flushing. Of course, Moses got his way as Shea Stadium gets built there and he places the 1964 Worlds Fair there, which ended up being a money loser.

Since he couldn’t get what he wanted, O’Malley looked west and made a sweetheart deal with Los Angeles. He got the land to build a stadium at Chavez Ravine at such a great price that he would have been crazy to turn it down. Los Angeles was the future and the downfall of New York City into fun city had already begun and only escalated in the late 1960’s. If O’Malley doesn’t make the deal to move to Los Angeles, someone else like the Chicago White Sox or the St. Louis Browns would have done it. O’Malley’s luck was able to convince New York Giants owner Horace Stoneham to move the team to San Francisco and retain a natural rival than moving the team to Minnesota.

O’Malley only moved the team because he couldn’t build a stadium for his team in Brooklyn, making him into the biggest villain in Brooklyn history was completely unjustified.