Trump delays the fiduciary rule, but the broker-dealers lost

Trump delays the fiduciary rule, but the broker-dealers lost 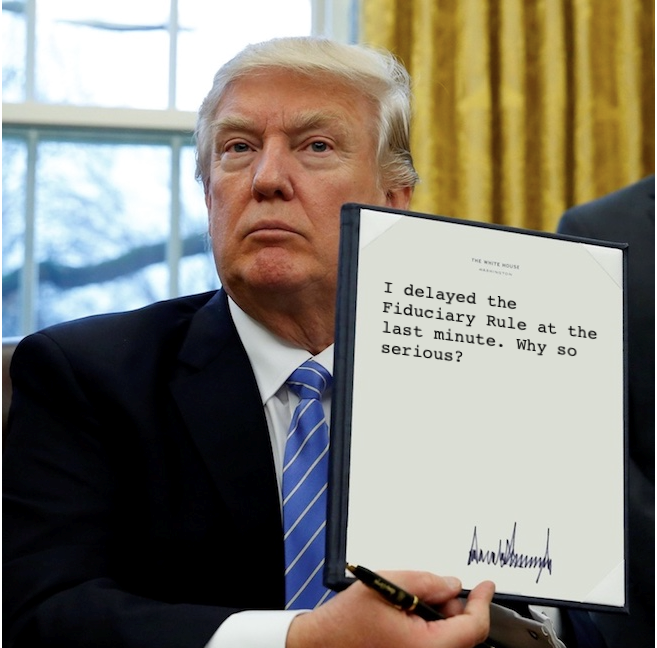 Before brokers rejoice about what seems like the end of the rule, they shouldn’t uncork the champagne bottle. They’ve paid a high price to comply with the rule. That means paying ERISA attorneys a lot of money to comply and they have spent so much money on mailings, developing policies, and procedures. They’ve told a lot of their clients that they would have to stop servicing their accounts to comply. So it’s going to be hard for them to go back to business as if the new rule never existed.

Don’t be surprised to see some sort of backlash. The fiduciary rule has been the talk of the retirement plan industry for the last couple of years and plan sponsors have slowly learned the ramifications of it especially the fact that brokers weren’t serving in a fiduciary capacity. Now that it looks like they’ll be free from it again, there will be some sort of backlash especially now since Trump is pretty unpopular these days. I just don’t think its going to be so easy for broker-dealers to go back in doing what they did before they had to start complying with the new rule.

Just because the new rule is being delayed and/or being killed, doesn’t mean there wont be a fiduciary rule coming down the pike in another 2, 4, or 8 years. I think broker-dealers are going to want this rule implemented rather than a rule in the future that is just going to be more oppressive for brokers to operate in the retirement plan space.

So new fiduciary rule is delayed and the broker-dealers didn’t win anything.