What Were They Thinking #5? Can’t Stop The Music

What Were They Thinking #5? Can’t Stop The Music 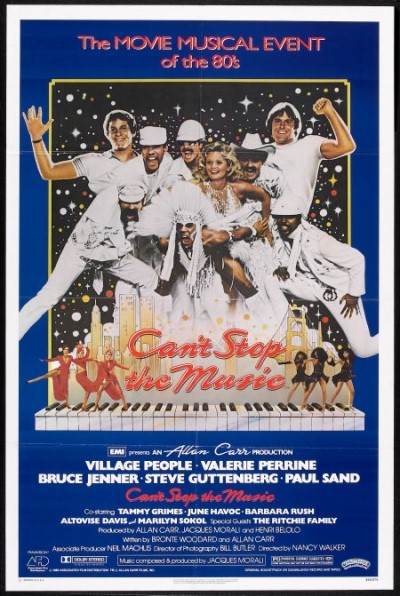 They say the disco craze pretty much ended with Disco Demolition Night that turned into a near riot at a Chicago White Sox in 1979, but we know that it was certainly killed off with the release of Can’t Stop The Music. The movie was supposed to be a pseudo-biography of The Village People and its just such a train wreck that it’s a camp classic.

This project was produced by Allan Carr whose claim to fame was that he co-produced Grease and Can’t Stop The Music pretty much derailed his movie producing career. His later exploits was the success of turning La Cage Aux Folles into a musical, but I think much of the work belongs to Jerry Herman and Harvey Fierstein for the music, lyrics, and book. He’s also responsible for producing the maligned 1989 Academy Awards, which had Snow White and Rob Lowe signing Proud Mary that almost got Disney to sue the Academy.

By the time the movie was released, disco was dead. Even if this was going to be Gone with the Wind of disco, it wasn’t going to end up a hit. One of the strange bits of trivia is that the director is Nancy Walker, Rosie from the Bounty commercials, Ida Morgenstern on Rhoda, and she was the maid on McMillan and Wife. Nancy Walker did direct comedy episodes on televisions and this was her sole movie directing credit.

Where do I start with the train wreck? First off, this was Bruce Jenner’s first acting role since the 1976 Olympics and he’s awful. He was a terrible actor even including his bit on CHiPs when Erik Estrada walked off a few episodes in a salary dispute. The experience was so bad that Bruce Jenner didn’t act in another movie for 30+ years.

The movie is how a music producer played by Steven Guttenberg and his roommate played by Valerie Perrine organize The Village People. It was 1980, so they scrubbed the homosexuality themes of the band when the majority of them were gay. The musical scenes especially “Milkshake” has to be seen to believe and you’ll never think of “Y.M.C.A.” after seeing the musical number from the movie.

It’s such a trainwreck of a movie that it won the inaugural Worst Picture of the Year from the Razzies, so it did make history. It also turned a $20 million budget (which is about $58 million today) into a $2 million box office take. The other disco movie, Thank God It’s Friday was released at the height of the disco craze in 1978 and grossed almost $8 million on a $2 million budget. Timing is everything in life, but at least Thank God It’s Friday is watchable.