What Were They Thinking #7? The Sting II

What Were They Thinking #7? The Sting II 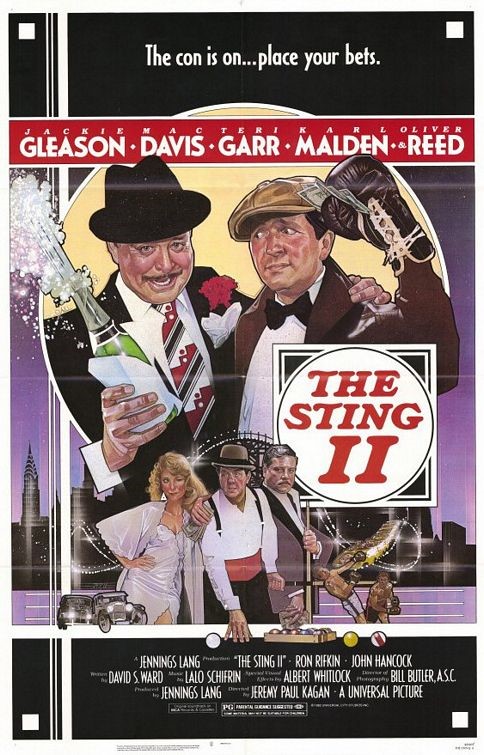 The idea behind a movie sequel is that it’s supposed to continue the story or expand an earlier movie. But when is a sequel not a sequel? Maybe when it doesn’t have the original actors playing the roles or when you slightly change the characters of the previous movie or maybe you have both and you call it The Sting II.

The Sting was an Academy Award winning caper movie set in 1936. The 1973 movie starred Paul Newman and Robert Redford as con-men Henry Gondroff and Jimmie Hooker. They try to play a con on mobster Doyle Lonnegan played by Robert Shaw as revenge for killing Jimmie’s partner, Luther Coleman. It’s a classic movie and the catchy
Ragtime music helps.

The Sting II is a 1983 movie that claims to be a sequel to the first one. Claims to be? I don’t really know what to call this train wreck of a movie. Instead of Newman and Redford returning, Jackie Gleason and Mac Davis replace them. Usually when you recast roles in movies, you tend to want people who like the actors recasted. No one could accuse Gleason and Davis as suitable replacements for Newman and Redford.

Where they even playing the same characters? Jackie Gleason was playing Fargo Gondroff, not Henry Gondroff. Is Fargo, Henry’s older and heftier brother? Jackie Gleason was a hell of an actor, but he’s no Paul Newman in the looks department. Mac Davis plays Jake Hooker, not Jimmie. Robert Shaw died in 1978, so Oliver Reed played Lonnegan who lost his first name in the sequel. In the sequel, he’s from Philly when he was from New York in the first film. Hooker also gains a boxing background in the sequel as part of the new con.

Why call it The Sting II? Well, maybe Universal wanted the public to assume it was a sequel since the original is so well loved. Heck, I just picked it up on ITunes when it was $4.99. In my mind, the movie is a sequel bait and switch, but the public should have known that Gleason and Davis couldn’t replace the iconic team of Newman and Redford. By the way, The Sting II only grossed $6 million in 1982 when the original grossed $159.6 million in 1973 so not much of the public was fooled.