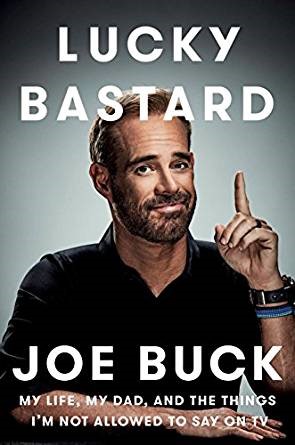 Joe Buck is like the Nickelback of sports broadcasters, he gets so much hate despite being kind of popular. Through my Facebook feed during any Fox MLB or NFL broadcast, I’ll see my friends criticize Joe Buck.

I’ve seen Joe Buck on the air since Fox debuted its MLB coverage in 1996. While he won’t be on the level of a Vin Scully or my favorite, Bob Murphy, he’s done a pretty good job as a play-by-play man for over 20 years. He’s also versatile as Fox’s lead NFL play-by-play man ever since he replaced Pat Summerall in 2002.

The knock on Joe is that he only got his job because he was Jack Buck’s son. While that certainly helped him net a gig announcing for the same team his father did, the St. Louis Cardinals, the job at Fox was based on Joe’s merit. Let’s not forget how Jack Buck bombed as the lead CBS play-by-play man in the early 90’s.

I also got to like Joe more when I read his book, Lucky Bastard. It was truly an entertaining book and Joe lays it all out there. His issues include being Jack’s son, his failed marriage, and his addiction to hair plugs. He was an entertaining guest on the Howard Stern Show a few weeks back and bought the book on the Kindle because of it.

People claim that Joe is biased against their team and I think that happens with anyone who’s a national announcer and you’re dealing with teams that have such a strong fan base like the New York Yankees or the Green Bay Packers.

So I like Joe Buck, don’t tread on me.