The Godfather Part III doesn’t get the love it deserves

The Godfather Part III doesn’t get the love it deserves 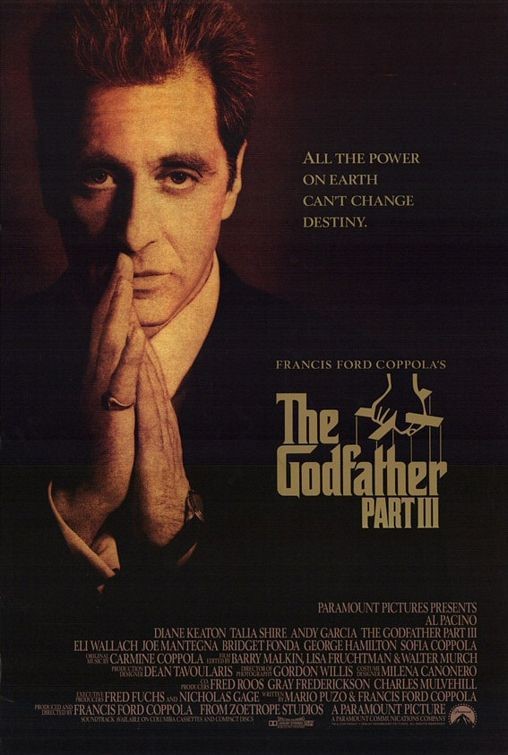 Sure, Robert Duvall isn’t in it because Francis Ford Coppola would give him more money when Al Pacino got $4 million. Sure, Winona Ryder would have been a better Mary Corleone than Sofia Coppola if she didn’t get sick. Sure, Al Pacino’s haircut was a little odd. However, it’s a really good film tying in some of the events of the Vatican Bank and the quick reign of Pope John Paul I into the Corleone family timeline.

The weak part of the movie is Sofia Coppola and she clearly was no actress and has pretty much stopped acting after all the attacks. However, Andy Garcia was brilliant as Sonny’s illegitimate son, Vincent Corleone who takes after his father in the temper department. Diane Keaton is back as Kay, who is moved on from Michael by remarrying, but still has a connection with him through their two kids.

The movie has some great scenes: the ambush in Atlantic City; Michael confessing that he killed Fredo to Cardinal Lombardo; Connie still thinking Fredo died: Kay making peace with Michael in Sicily; Vincent as the new Don Corleone; the opera; Michael going into diabetic shock; and Connie’s cannolis.

The Godfather Part III is like the Stars Wars prequels, it fails short of achieving that top level and people just treat it like its Caddyshack II or some other awful sequel like Beyond The Poseidon Adventure.

Besides Sofia’s acting, my only one criticism is that Francis Ford Coppola thought he was like the Corleone’s when he used one of the great tragedies in his life and placed it upon Michael at the end.

Try watching The Godfather Part III again and remember it was going to be nearly impossible to catch lightning in a bottle the third time.