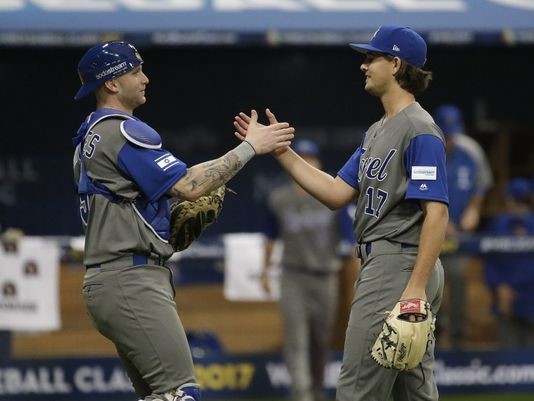 You remember that scene in Airplane!: an old lady wants something light to read and Elaine the flight attendant asks her if she wants to read a leaflet on famous Jewish sports legends.

When you’re a Jewish kid from Brooklyn and you love sports, you get a kick out of finding out which players were Jewish. When I was a kid, it wasn’t that hard and most stories about Jews in sports revolved around fellow Brooklyn native Sandy Koufax.

I get a big kick out of seeing Israel play at the World Baseball Classic even though only one player is an actual Israeli. All the players on the team have some Jewish heritage, so it’s nice to see at least 25 major league caliber players on the roster with some names I’ve heard of (Jason Marquis and Ike Davis). When I was a kid, my father told me how there was no interest in baseball in Israel and that Israel was never going to win an Olympic medal. Well, there is growing interest in baseball in Israel (they had an actual league one season) and Israel has won several medals since 1992 and a Gold Medal in 2004.

I was born here and I’m a proud American, it’s the country of my grandparent’s dreams. Yet I have strong feelings for a country that is the homeland of my people and is that underdog country that no one thought would survive after they declared independence in 1948. Israel has been the underdog for 69 years and despite its problems, it’s one of 16 teams at the World Baseball Classic and 25 Jewish ballplayers are keeping up with better teams. It’s also pretty cool when a former Rabbi Harry Halpern Day School and Midwood High School classmate Dan Rootenberg is the team trainer.

So while I pull for the U.S. to win it all, I still will root for that little country that could: the State of Israel.