What Were They Thinking #10? The 61st Academy Awards

What Were They Thinking #10? The 61st Academy Awards 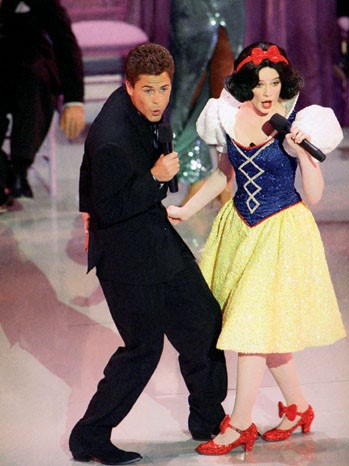 Why do you get when you mix the most famous awards show and the producer of Can’t Stop The Music? You get the Allan Carr produced 61st Academy Awards (March 29, 1989), which is mostly remembered as one of the worst telecasts in history.

Academy Awards telecasts are usually too long, but the 61st Academy Awards was reviled for more than just its length. First off, it was the first awards telecast in 18 years with no host and it’s the actual last telecast that hasn’t had a host. The show needs a host or multiple hosts as an emcee and the monologue that is now customary needs a host to deliver it. A host keeps the show going and it maintains a connection with the audience. Of course, some good jokes help.

The Allan Carr produced show refused to have live performances of Oscar nominated songs, which was a staple of Awards telecasts past. While I always think that the live performances are a waste of time, replacing them with other musical numbers doesn’t make the show better. The opening number for the 61st Academy Awards is only remembered for one thing: Snow White singing “Proud Mary” with Rob Lowe. It was such a bad number, that Disney threatened to sue the Academy until they received an apology. Another long musical number was “I Wanna Be an Oscar Winner” which showcased 18 up and coming actors and actresses in a musical number. None of those 18 which includes stars like Blair Underwood, Patrick Dempsey, and Corey Feldman have actually won an Oscar as of 2017 except Chad Lowe was married to Hillary Swank when she won 2 Best Actress Oscars.

The show was such a train wreck that the Academy created an Awards Presentation Review Committee to review why the telecast was so hated. They figured that the 12 minute opening number is probably the reason why the telecast was reviled. Carr got such a backlash from the show he produced that he never produced another movie or theatrical show before his death in 1999. It also led to the following year’s telecast getting a new host named Billy Crystal.  Billy is the most well known Oscar host since Bob Hope and has hosted the show 9 times, so you can never say that nothing good came out of the 61st Academy Awards.