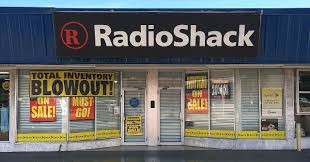 Radio Shack filed for bankruptcy again and is closing another 187 stores. I know the jokes and how people are puzzled that they’re still in business. However, there is a lesson here for plan providers.

When I was a kid, Radio Shack was a behemoth and they were actually one of the biggest computer manufacturers with their Tandy PC clone.  They were the place to get batteries, cables, tape recorders, and kids scientific/electronic toys. They did try to change with the times when they opened up Incredible Universe to compete with Best Buy where the stores were so tremendous that they had entertainment in the center that distracted people from buying electronics. The end for Radio Shack was Amazon.com. I no longer had to go to Radio Shack for that odd sized battery when Amazon sold it for half the cost. They tried selling cell phones, but most people like to deal with the carrier directly.

The point here is that you have to change with the times and adapt. Plan providers who couldn’t change in a fee disclosure environment left the business (ask how many insurance companies left the retirement plan business) and if a fiduciary rule is eventually implemented, there will be providers who will exit too or fail if they can’t change.

Don’t be like Radio Shack and change with the times.