What Were They Thinking #12? The Cadillac Cimarron

What Were They Thinking #12? The Cadillac Cimarron 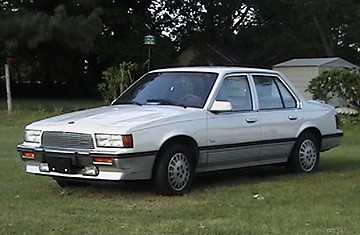 General Motors was the ultimate producer of different car brands.  The old Pontiac brand represented performance, Chevrolet represented value, and Cadillac is supposed to be their luxury brand. When I was a kid, my dream was to own a Cadillac because it was the most luxurious American car brand around and that was a time when Japan didn’t enter the luxury car market (which they did when Honda produced Acura in 1986).

In the late 1970’s, fuel economy was starting to become a major headache for General Motors because their line of V8 engine cars weren’t fuel-efficient. So they placed focused on producing smaller cars with smaller engines that would be more efficient.

So General Motors developed the J-line of cars.  The most well known of the J-line cars was the Chevrolet Cavalier. Other rebadged variants included the Buick Skyhawk, Oldsmobile Firenza, and the Pontiac Sunbird.  The mistake that General Motors made was extending the J-car line to Cadillac.

Why was this a mistake? It was pushed into production because of a panic by Cadillac and its dealers because of fuel costs and the sale of smaller European luxury cars like Mercedes, Saab and Volvo. Of course, by the mid-80s, fuel costs fell because of overproduction. It was also an assumption that car buyers will buy a car as long as they slap the Cadillac tag on a car add some luxury components, and charge double what other J-cars cost. The problem is that Cadillac car buyers were smarter than that. They knew it was a rebadge of a Chevrolet Cavalier and luxury car buyers don’t want cars that look like Chevrolets.  It ended up devaluing the brand and hurting Cadillac sales for many years to come.

Cadillac was known for big, luxurious cars. The Cadillac Cimarron looked and performed like a Chevrolet. Car buyers were smarter than what General Motors gave them credit for and in the first year of sales in 1982, it sold a third of GM’s projections. The 4 cylinder car was Cadillac’s first since 1914 and it such a disaster that they eventually made the car into a V6 before killing the car in 1988. How rare was sales? In 7 years, Cadillac only sold 132,499 Cimarrons.

Along with the AMC Pacer and the Yugo, the Cadillac Cimarron always makes the worst cars of all-time list. It was a shortsighted decision to try to turn a Chevrolet Cavalier into a Cadillac.