What Were They Thinking #13? The AWA doesn’t build around Hulk Hogan

What Were They Thinking #13? The AWA doesn’t build around Hulk Hogan 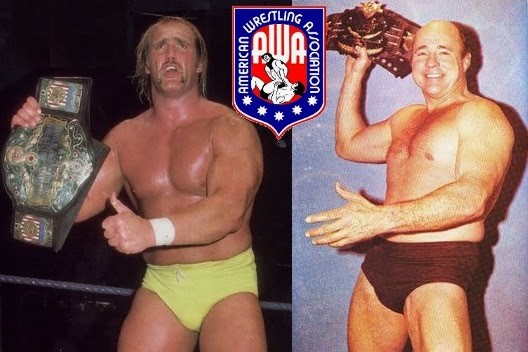 Professional wrestling in 1982-1983 was a little different than it’s now. The country was carved up in regional territories. While the American Wrestling Association (AWA) and the World Wrestling Federation (WWF, now World Wrestling Entertainment) were distinct promotions, member of the rival National Wrestling Alliance would never dare raid the other territories to compete against them directly.

This cartel type arrangement, which barely survived a Sherman Antitrust action still was alive in 1982, but change was coming. 1982 was a watershed event in the history of pro wrestling because that was the year that Vince McMahon Jr. bought out his father’s interest in the WWF. While his father was a faithful member of the National Wrestling Alliance for must of his time running the WWF, Vince Jr. didn’t have such an allegiance. By 1983 Vince Jr. landed a cable slot on the USA Network and he plotted a national expansion by already running shows in Los Angeles, which was far and away from the WWF’s base in the Northeast Corridor. The only problem is that Vince needed a star and long time Champion Bob Backlund lacked the charisma to carry a national promotion. Vince saw that cable television would allow promotions to have a national presence and help facilitate a national expansion. Vince probably knew that if he didn’t try to break the cartel and invade the other territories, someone else probably would.

Hulk Hogan was a WWF heel wrestler in 1980 and 1981 and he made an enemy of Vince McMahon Sr. by taking time off to film a scene for a little movie called Rocky III where he played pro wrestler Thunderlips. After burning his bridges with the WWF, Hogan landed in the AWA. The AWA was owned by Verne Gagne with a base in Minnesota, a former NCAA amateur wrestler who transitioned into one of the all-time greats and was often the champion of his promotion until retiring in 1981. Verne liked pure pro wrestling and he liked wrestlers who had great athletic pedigree. That wasn’t Hulk Hogan, but AWA Champion Nick Bockwinkel who was already in his late 40s. Most of the AWA roster was filled with quality wrestlers who were there forever and on the north side of 40. Hogan came in as a heel and was quickly turned fan favorite. When Rocky III came out in 1982, he was a crossover star and should have had a promotion built around him. Verne Gagne didn’t see it that way.

Given the opportunity to build around Hogan and give him the AWA title, Gagne refused. While he teased a Hogan title run by having him beat Bockwinkel for the title and only to have the decision reversed at Super Sunday, Gagne was stubborn. Finally in late 1983, Gagne offered Hogan the belt, but he refused. Why would Hogan refuse such a scenario? It came with strings attached. Gagne offered the belt as long as he got to wet his beak with a piece of Hogan’s merchandising and Japanese touring money. We don’t know the timeline, but it was probably around the time that Hogan got a call from Vince McMahon Jr. who had an offer that Hogan couldn’t refuse. Hogan gave the AWA his notice he was leaving and Verne Gagne thought it was a prank committed by Florida promoter Eddie Graham.

With Hogan signed, McMahon had his star and it was too late for the rival promoters to stop him because they were unorganized and refused to put money in their product. Wrestlemania in 1985 was the game changer and one by one, the territories died including Verne Gagne’s AWA which died a slow agonizing death in 1991. Hulk Hogan was the greatest star in the history of professional wrestling and Verne Gagne let him go over his stubbornness of what wrestling should be.