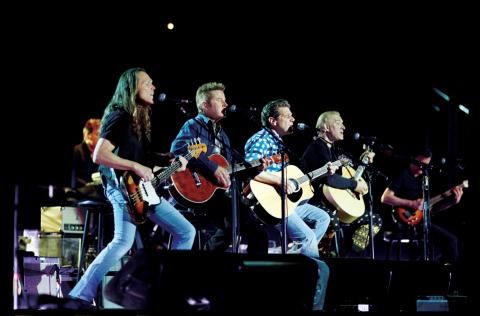 Kiss is on my favorite bands and when they announced a Farewell Tour for 2000, I didn’t take a bite. I knew that as long as Gene Simmons is walking and in need of shekels, Kiss would be on tour. I thought the idea of a Farewell Tour for them was an insult to my intelligence and I took a pass. Of course, I saw Kiss on a twinbill with Aerosmith in 2003. Of course, people will say that the Kiss Farewell Tour was a Farewell to the original 4 since Ace Frehley and Peter Criss are gone, their replacement in the makeup are actually better.

Has there even been a farewell tour that actually lived up to its name? The only one I can think of is Glen Campbell and that’s because he’s afflicted with Alzheimer’s. The Band’s iconic farewell concert in The Last Waltz wasn’t even a farewell as they regrouped without Robbie Robertson about 10 years later. The Who’s farewell tour was in 1982 and they’re still playing 35 years later. The Eagles’ knew their farewell tour wasn’t a farewell tour when they called it The Farewell I Tour in 2004. When Glenn Frey died in 2016, Don Henley said that was the end of the band since it was Glenn’s band. Of course, The Eagles will be playing the Classic East and Classic West concerts in July.

Farewell tours are just a marketing gimmick, for the most part. They’re a great way to raise interest in a tour by suggesting to fans that it’s the last time to see their musical act live. The problem is that the artist who is saying goodbye usually doesn’t want to say goodbye and will eventually tour again when the situation is right to go back on tour. Real farewell tours are never announced, they just become a farewell tour after the artist died. Michael Jackson’s 30th anniversary shows at Madison Square Garden in 2001 was his farewell shows, yet his audience would have no idea until after he died in 2009.  Of course, Michael died while in preparation for his This Is It Tour, which never took place.

So if your favorite acts launches a farewell tour, chances are you can see them again.