What Were They Thinking #15? The Apple Newton

What Were They Thinking #15? The Apple Newton 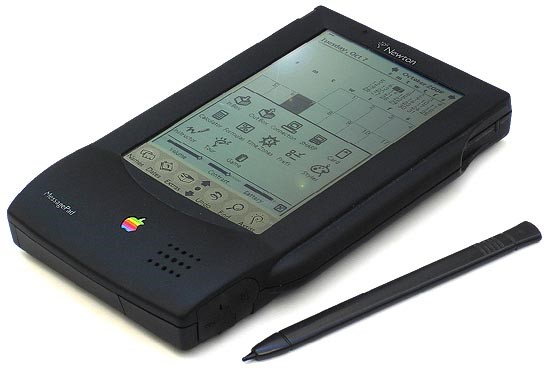 Apple Inc. has a checkered history of success and failure. While they have been hitting homeruns since they released the IPod in 2001, its history is a history of boom (the Apple II) and bust (pretty much anything between the Apple II and the IPod).  While I contest that Apple always had the better computer (Mac is always better than PC), better doesn’t always mean better sales.

In the early 1990’s Apple developed a product that when I first heard of it, thought it was going to be a huge deal. It was a cutting edge product, ahead of its time, and whose technology still affects products today. Yet the product was a huge flop that almost torpedoed Apple and was a joke on The Simpsons. The Apple Newton was a complete bust and proof that cutting edge products that don’t work are always going to be a flop.

In 1993, Apple was still chugging along. Steve Jobs was ousted in 1985 and John Sculley as Apple CEO started to develop what was known as the Newton in 1987. The Newton was a personal digital assistant (PDA) and it was so cutting edge that Sculley actually coined the term. The Newton was supposed to be a game changer for Apple, it was supposed to reinvent personal computing by making it portable. It was ahead of its time and failed because it wouldn’t properly work.

One of the biggest features of the Newton was the stylus pen (which Steve Jobs hated and eventually led him to kill the Newton when he returned to Apple in 1997) and handwriting recognition software. Of course, the problem is that it didn’t do a very good job in deciphering handwriting so that it became a joke on the Simpsons episode “Lisa on Ice”.

By allowing users to store names, contacts, notes, and calendar events, it was cutting edge before Palm cracked the PDA market 4-5 years later.  Later versions of the Newton had word processing, a web browser, and even a pocket Quicken.

It was ahead of its name, but the fact that it was buggy and too costly (always a problem for Apple products until 2001) sealed its doom. By the time that the Newton was killed in 1998, Palm helped bring PDAs into the mainstream. It could have been the Newton as the PDA leader, but the handwriting recognition was probably its undoing.

The Newton was a series of unfortunate events for Apple that eventually led to Steve Jobs coming back to the company he co-founded and you know the rest.  The technology of Newton could be found in the old Windows CE software for compact devices and I still believe some of that Newton technology showed up in what eventually became a Newton descendent, the IPad.