What Were They Thinking #17? Incredible Universe is an incredible failure

What Were They Thinking #17? Incredible Universe is an incredible failure 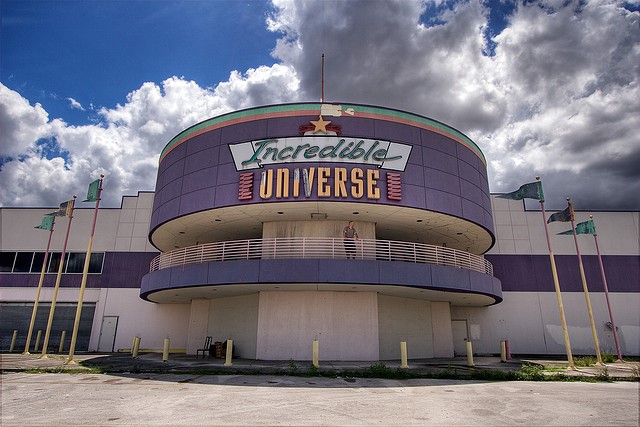 After selling off their computer brand, Tandy, Radio Shack under its parent company also named Tandy decided they needed to take on the big box electronic retailers. So along with Trans World Entertainment (who owns f.y.e. and probably at one point owned every failed mall based music or video chain), they decided to create their own store called Incredible Universe.

To compete with Best Buy and Circuit City, Incredible Universe decided it needed to be bigger. It needed to be so big; it needed to have its own McDonalds and a day care center so customers could drop off their kids. It needed to be so big that it should have its own rotunda, so musical acts or product demonstrations could be performed for the crowds of customers. There would be space for training rooms to train customers on electronics and computers, Stores were 185,000 square feet so they could house 85,000 items to sell. The stores were twice the size of other electronic stores chains.

They opened two stores in 1992 and eventually opened 17 stores and the business was dead by 1997.

What happened? If you double the square footage of your competitors, you essentially have to sell double the volume what your competitors sell. Electronics isn’t exactly the largest of margins of profit and items becoming obsolete means that you cant hold on to your inventory.

Much of the square footage was spent on dead sales space such as a McDonalds, training rooms, a day care center, and a rotunda with a stage. The rotunda with the stage was the ultimate distraction because musical acts distract customers from doing what they should be doing, buying products. Incredible Universe wanted to be the Walt Disney World of electronics stores. Unlike Disney World, Incredible Universe didn’t charge admission and people were going there to be entertained and not buy anything. With 17 stores in 1996, Incredible Universe lost $90 million, more than $5 million per store.

They eventually sold they only money making stores to Fry’s and its legacy in New York is that the Westbury store became the first Long Island Target. Otherwise, it’s a forgotten failed retail concept that showed that bigger isn’t better.