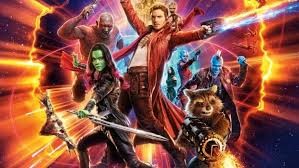 When compared to other Marvel Cinematic Universe movies like Iron Man, Captain America, and Thor, Guardians were an interesting change of pace because these were peripheral characters in the Marvel world that were finally given an opportunity to shine. The movie was a homerun and a signal to Marvel/Disney that they can get peripheral characters to be main characters in movies (Dr. Strange and the future Black Panther and Marvel Girl movies come to mind). It also helped that the movie had a great soundtrack and many contemporary cultural allusions.

Volume 2 was unleashed and it’s one the best sequels ever made because it avoids the sequel curse by offering a change of pace, but most importantly, character growth. Rather than being a rag tag of galactic misfits, the Guardians grow together to be a family. Star Lord finally knows his place in life and his heritage in the sequel. He is no longer the galactic thief, but a leader of a family of heroes that despite the bickering, save the universe for the second time.

I can’t say the sequel is better than the first Guardians because I don’t think it is. What made Guardians unique in the first film is now old hat because the first movie stood out as being an anti-super hero-super hero movie. Of course, Deadpool later mimicked that placement to R rated excess and a bigger box office. Yet Volume 2 is certainly going to outgross its original, which is a unique placement in the MCU.

Even if you have no interest in super heroes, Volume 2 is an excellent movies that certainly plays to the interests of the audience with its soundtrack, cultural allusions to 1980s pop culture, and Baby Groot. Another homerun by Marvel. Now if only, DC could learn from what Marvel does.