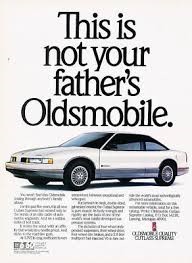 General Motors (GM) had multiple car brands for the public. While Cadillac was the luxury line and Chevrolet was more of an economy brand, GM had Oldsmobile and Buick which where a notch below Cadillac in terms of luxury. There wasn’t much difference between Oldsmobile and Buick except that maybe Buick purchasers were a little younger and the cars were a little sleeker.

Oldsmobile was a highly successful nameplate for GM, having sold 1,165,649 vehicles in 1985. It was the oldest surviving car nameplate and I can attest to the quality of their vehicles as my first car was a 1985 Delta 88. My father bought that car because he found out that GM was cutting the large V8 car into a smaller V6 model for 1986 just like they had done with the 98 in 1985. It never made sense why Oldsmobile was going to go to make their cars smaller with a front wheel drive when oil was cheap in those days and their car buyers wanted big cars. As a 13-year-old kid, I didn’t understand that the average buyer for an Oldsmobile trended older and they wanted to push their vehicles to a younger crowd.

So in the late 1980’s, Oldsmobile went with smaller, high performance cars like the new Delta 88, the 98, the Cutlass Supreme, the Cutlass Sierra, and a new Toronado. They commissioned their ad agency to develop a new campaign to highlight their new vehicles and market to younger buyers. The campaign was: “This is not your father’s Oldsmobile.” It was the new generation of Olds. The only problem is that the typical buyers of Oldsmobiles when the campaign debuted in 1988 were fathers and that older demographic that Oldsmobile was trying to move away from. The only problem is that the cars and the campaign never attracted the young demographic it wanted, it only insulted the people who actually bought Oldsmobiles in the past. By going smaller and sportier with a campaign that insulted their typical buyer, all Oldsmobile did was push their customer base to Buicks, Lincolns, and Cadillacs.

There is nothing wrong with trying to re-invent your brand, but you can do without insulting your long time customers. Oldsmobiles couldn’t attract new buyers to its reinvented brand and only destroyed its customer base. How bad was the campaign? In 1986 (two years before the ads), they sold 1,050,832 vehicles. By 1990, sales were down to 489,492.

The brand was severely damaged and it languished for another dozen years before GM mercifully pulled the plug in 2000 when its sales were 237,399 vehicles, just less than quarter of its 1985 sales. When they look at bad ad campaigns that destroyed a brand, the one always makes the list of one of the worst ad campaigns in marketing history.