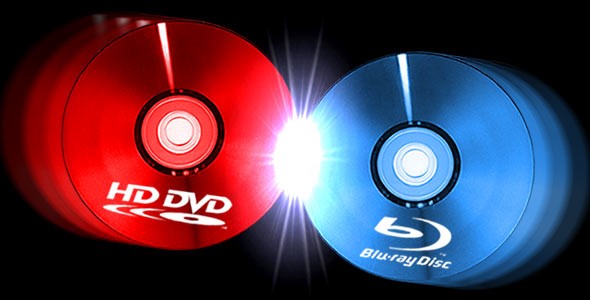 They often say that those who forget history are soon doomed to repeat it. Those in the electronics industry simply forgot the lessons from the videotape format war when they decided to split on the format for the next generation of standard DVD. Perhaps one camp thought they had the winning format because Sony was again on the opposite side and they lost on Betamax, but Sony had an ace up its sleeve that they didn’t have in the 1970s.

Unlike with Betamax, Sony wasn’t alone in its Blu-Ray format. They were joined by Hitachi, LG, Panasonic, Pioneer, Samsung, Sharp, and Thomson in pushing its Java based interactive Disc. The rival format was HD-DVD and it had a Mircrosoft based interactive disc. HD-DVD was backed by Toshiba, NEC, and Sanyo.

The studios were torn over the formats and most studios picked to support one format or another. Blu-Ray had the support of Columbia (owned by Sony), Disney, and 20th Century Fox. HD-DVD had Universal, Paramount, and Warner Brothers.

Unlike the videotape format war, there was going to be a clear winner from the start and no one realized it at the time. Blu-Ray was going to win for one reason only: Sony made sure that a Blu-Ray player was added as a standard feature for Playstation 3. Microsoft only added an HD-DVD player as an add-on feature for their XBox 360. What did that mean? 10.5 million had a Blu-Ray player and only 1 million had HD-DVD players, just thanks to the ingenuity of Sony.

The sad fact is that many consumers didn’t buy any player until the format war was done and many studios and retailers wanted the format war done away with as soon as possible. Blockbuster, Target, and Wal-Mart started to drop support and shelf space for HD-DVD. The biggest studio in terms of DVD market share and early supporter of HD-DVD, Warner also withdrew support and pledged to start releasing titles in Blu-Ray only. Even a drastic 50% cut in HD-DVD player pricing by Toshiba couldn’t save the HD-DVD from the dustbin of electronic history.