Sam Adams got too big

Sam Adams got too big 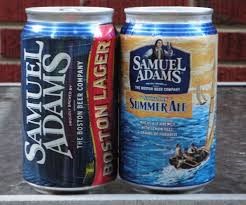 When I was in college, bad beer was the big thing because it was inexpensive and college kids didn’t drink beer for taste. My problem was that I didn’t like the taste of Budweiser, Coors, Miller, or any other regular domestic beer. I think even Heineken is too bitter.

Then I heard about this beer called Samuel Adams, it was constantly being advertised on Howard Stern where the owner Jim Koch was pitching the high quality ingredients that went into his beer. My friends told me I wouldn’t like Samuel Adams and when I drank it, I thought it was the best beer I ever had. It’s still my favorite that they still make (Scotch Ale and Honey Porter were better and are no longer made by parent company, Boston Beer Company).

When I went on a trip to Boston, I visited their factory for a free tour.  I was then in a seedy part of Boston off the Stony Brook T stop (funny, I was going to Stony Brook in New York for college at the time). The tour was free except for the dollar they asked as a donation. They gave a tour of how the beer was brewed and they strive for quality. They talked about the reasons why they wouldn’t use aluminum cans and why their bottles were brown because of the impact on taste. They gave a nice taste test at the end and I was a fan ever since.

Samuel Adams was getting bigger and bigger and while they started the micro brewery revolution, they were no longer micro brewers. At one point, they became the biggest U.S. owned brewery (since Anheuser Busch, Miller, and Coors were now under foreign control). They still craft great beers, but I have been down on the, for two reasons: they have added too many India Pale Ales to their roster with their Rebel Western Style IPAs and they’ve added aluminum cans. I used to like IPAs and I think the whole hoppy IPA thing is kind of done. While Samuel Adams was slow to add it, I think they may have come late to the IPA party.

As far as the aluminum can, it’s a betrayal for me. They claimed up and down on how aluminum cans negatively impact taste and they started to produce them. I guess it’s the curse of being popular and they thought aluminum cans would meet a demand in the marketplace. When the Mets clinched the 2015 National League East title, I had a sleep study to go to and I bought a couple of cans of Samuel Adams Octoberfest and it was an absolute disappointment because it didn’t taste like the same beer I get in a bottle and far from the one I get on tap.

While I still love their beer, I’m just concerned they are just getting too big.