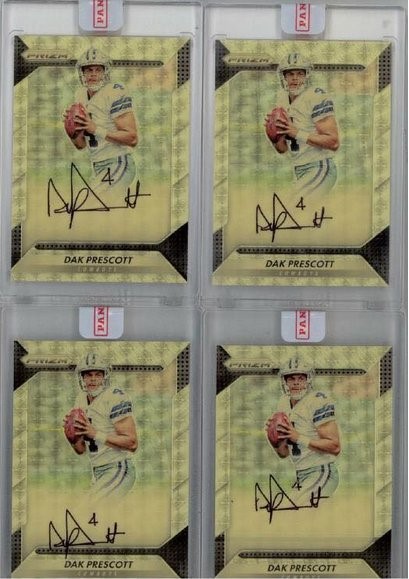 Sports trading cards today is a business that is still just a fraction of what it was in the late 1980s and early 1990s. That sports card boom was built on crazy speculation and over printing, it was on its decline even before the 1994 Baseball Strike made it a depression.

Despite the fact that it’s a fraction of what it was, it’s still a big business because sports card manufacturers have learned their mistakes with limited printing and high-end sets. There are card sets where the box is $850 and Topps even had a baseball set last year where it was $22,000 for a briefcase.

One of the big selling points of trading cards these days is autographed cards where the card manufacturer guarantees a certain amount of autographs per box. Panini America has the exclusive NFL license to make NFL trading cards and needless to say, Dak Prescott cards are a big thing because he was a huge star in his rookie season as the starting quarterback for the Dallas Cowboys.

The only problem is that when collectors who submitted their NFL Prizm cards for grading to Beckett Grading Services, they were told that the autographs weren’t real. Beckett believed that the cards were signed using an autopen machine. Beckett said the signatures looked uniform and without flow that you would see in an authentic autograph.

Trust in the sports memorabilia is a big thing and that’s why when it comes to autographs, I only buy autographs that have verification from Steiner, Upper Deck Authenticated, Tri-Star, PSA/DNA, JSA, or Beckett. Autographed cards from sports card manufacturers should be trusted except the problem is that Panini clearly has no verification process to make sure that the athletes are signing the card. All they require is an affidavit from the player that they signed the cards and don’t require a third party to witness the signings.

This isn’t the first time Panini pawned off fake autographed cards. Just this year, Panini had to admit autographs by NFL prospect Takkarist McKinley were fake. They’ve also had issues of pawning off game used jersey pieces that were clearly not game used.

Panini and Dak Prescott claim they have no idea how these autopen autographs happened. Either Panini or someone in Prescott’s camp did it because it’s not like you or me brought an autopen and signed on Dak’s behalf. All I know is I don’t trust Panini and I’ll stick to Topps baseball cards.