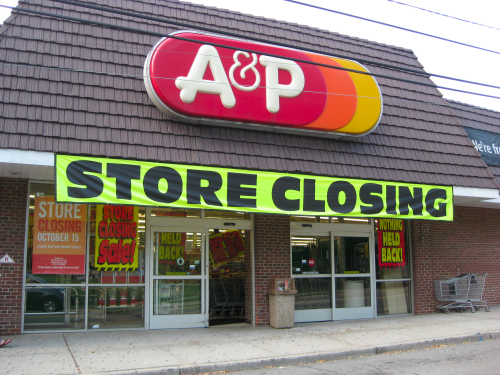 From 1915 through 1975, A&P (corporate name was the Greater Atlantic & Pacific Tea Company) was the largest food/grocery retailer in the United States (and until 1965, the largest U.S. retailer of any kind). It had more stores than Wal-Mart and had $2.9 billion in sales in 9130. It was Wal-Mart before Wal-Mart and it died in late 2015, but it had been dying for about 65 years. It’s a textbook case of a business that didn’t see the future and failed to adapt.

A&P had grocery stores coast to coast; it had about 14,000 stores throughout the country. It put so many mom and pop grocery stores out of business that Congress wanted to regulate it. The only problem was that around 1930, A&P was going to slowly die for the next 85 years because they couldn’t grapple a simple concept that was changing food shopping forever: it was called a supermarket.

While A&P tussled with the Federal Government in the 1940s that wanted to declare it a monopoly, the seeds of A&P’s demise were pretty much sealed with decisions made in the 1950s. The first mistake is that A&P didn’t put money back into their supermarkets; they were more interested in corporate dividends than putting capital back in the store while competitors constantly modernized. Another big problem is that A&P’s labor costs were higher than their competitors. Another problem is that while their competitors touted national brands, A&P pushed their private label brands, which negatively impacted sales.

In the 1970s, A&P closed more than 40% of their stores while building 300 larger supermarkets. A&P started to exit many markets around the country and grew smaller and smaller. It eventually discovered that A&P’s name didn’t matter much as they bought regional supermarkets like Waldbaums, Kohl’s (the supermarket), the Food Emporium, and Farmer Jack’s and kept their names. Even that didn’t work as the company was constantly closing stores thanks to the their better equipped competitors and Wal-Mart. They sold off their Eight O’Clock coffee brand and probably the death knell is when they bought Pathmark, overpaying for a New York metro area supermarkets that was dying on its own. By the time A&P closed its doors in 2015, they only had about 296 stores left.

A&P proves that you can be too big and still fail. It failed because it couldn’t grasp the ever-changing business of retail. Just because you dominate a business, doesn’t mean you always will when you can’t conform to change.