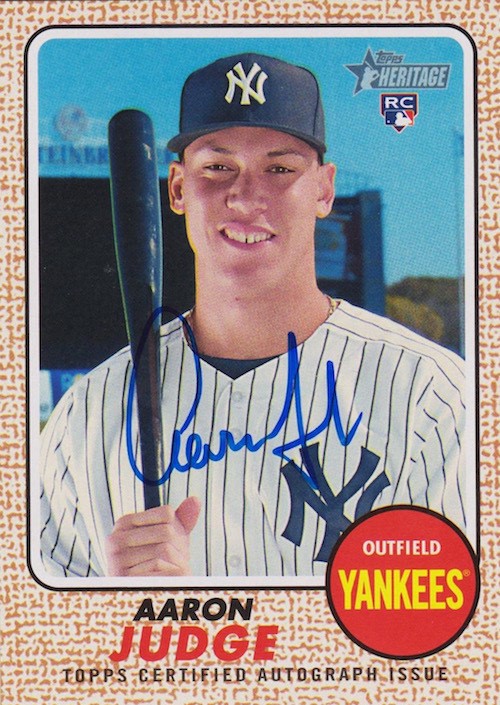 I’ve lost enough money in the tech and real estate bubble to recognize another bubble. The craze in the sports memorabilia and trading card business regarding Aaron Judge is reaching absurd proportions.

Sure the rookie craze regarding star rookies in the 1980s is something I went through when my pal Gary and I would stop at Woolworths for the Donruss and Topps cards looking for Gregg Jefferies rookies. However, the Aaron Judge craze is reaching much higher proportions.

The reason why the craze regarding Judge is crazier is because of EBay, limited edition cards, limited edition autographed cards, and the wide availability of game used jerseys. A rare autographed card was sold on EBay for $14,000. Judge’s first game used Yankees jersey just sold for $160,644. That would be a lot of money for a Hall of Famer, but a guy with a year under his belt? It’s too speculative and it’s building a bubble that will eventually burst. Why? Judge is signing too many autographed cards and with the way the memorabilia business runs, he’s probably wearing a new jersey every day. Unlike guys like Mickey Mantle, Roberto Clemente, Willie Mays, and Babe Ruth, there will be enough autographs and game used jerseys to satisfy the market. There is also a question as to whether he can still hit home runs at the pace he’s been continuing.

I had an Aaron Judge autographed Topps Now card for about $175. Got it graded for $35 and then flipped it on EBay for $480. The reason I flipped it is because I realized Judge is signing to many cards for Topps and that there will likely be a flood of them once he stops his hot hand of hitting. I eventually used that money to but vintage cards like a 1964 Topps Roberto Clemente PSA 8 because high graded vintage cards are limited and there will be no limit on Aaron Judge autographed cards.