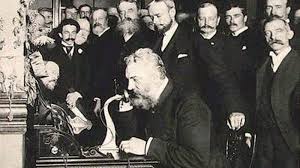 This column at a few points has shows the big mistakes of companies not buying or developing a cutting edge technological product because they didn’t think the product would catch on or because the product would threaten their core business. The perfect example was Kodak was not selling the digital camera it developed because it would threaten their core film business or Blockbuster not wanting to buy Netflix when offered.

While we often know Western Union as the place to send payments around the world, their bread and butter was the telegram, which were transmitted by telegraph using Morse Code. To understand what a big business that telegram were, Western Union’s telegram business started in 1851 and only ended in 2006.

The telegram business could be threatened by a device that did better than just transmitting code over a telegraph. That device was a telephone and in 1976, Alexander Graham Bell wanted to cash in on his patent for the telephone and offered it to Western Union. Western Union had no interest because they thought it would be silly for people to talk over a device when they could send a telegram instead.

When the phone did catch on, Western Union tried to cash it by developing their own phone. However, they ended up violating Bell’s patent and in an agreement to end litigation, Western Union had to give up the phone business. Western Union could have been the biggest telecommunication company in history, but didn’t understand that technology would make the telegram irrelevant. They realized too late.