What Were They Thinking #33 Keurig Cold is ice cold failure

What Were They Thinking #33 Keurig Cold is ice cold failure 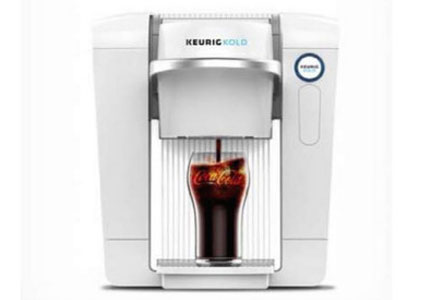 In 1988, I was on a family trip to Israel and I saw a machine that made seltzer. I thought it was a great product and my mother jokingly suggested that she should try to import it. That seltzer machine may or may not have been an early SodaStream machine, but this was a product that didn’t reach out our shores for another dozen or so years.

SodaStream is an Israeli based company that produces home-based soda machines. While the machines are inexpensive (less than $100), SodaStream’s bread and butter is selling soda mixes and CO2 canisters that make the soda fizz. I’m a big diet soda drinker (yeah, I know) and I was getting tired of waiting for the sales on 2-liter bottles and I was tired of having to deal with the recycling machines to get my deposit back. It also helped that it was better for the environment and I saved money with their soda syrups. So I took the plunge with SodaStream about 7 years ago and I have been happy with the product.

Around the time I got SodaStream, I convinced my wife to get a Keurig K-cup machine because I don’t drink coffee and a single served brewed coffee is better than instant coffee. Keurig first started offering their coffee makers at offices and then started offering the machines for home use at around $100 or so. Like SodaStream, the money for Keurig was in the single pod coffee cups.

Keurig decided that to expand their business, they should offer a homemade soda machine. They also partnered with a company that knew a thing or two about soda. Coca-Cola bought a 10% stake in Keurig while deciding to offer their products for what would be the Keurig Kold machine. Panicking that their no-name brand of soda syrup wasn’t enough, SodaStream made a deal to test a Pepsi Homemade brand of syrup.

When Keurig decided to make their machine, they didn’t want the SodaStream’s feature of having a CO2 cannister that eventually had to be replaced when the canister was empty. Keurig was developing a soda pod that would actually supply the carbonation.

As a SodaStream user, I was intrigued by what Keurig was doing since Coke Zero is my favorite drink. Keurig said their machines would be more, but I kept an open mind.

When I first saw the Keurig Kold at Target in late 2015, I knew the machine was an epic fail. The machine had a price tag of $370 when most SodaStream was less than a quarter of that price tag. What really sunk the machine for home use were the pods.

The soda pods were $1 a piece and the pod only provided 8 ounces of soda. The cost was crippling when you remember than a 12 ounce can cost about $1 and a 2-liter bottle on sale can cost $1 too. In addition, who only drinks 8 ounces of soda at a time. Every time you wanted more, you had to use another pod. SodaStream allowed you to make soda with a one-liter bottle.

The Keurig Kold was such a failure that Target quickly started discounting the machine and eventually discontinued it from sale from their stores within 6 months. Keurig Kold priced itself out of home use because buying soda at the stores were cheaper. With SodaStream, it’s probably costing me 25 cents a liter. Cost and convenience are important for these homemade machines and Keurig Kold had neither. The machine that was seen as the SodaStream killer was killed off itself after 9 months on the market.