What Were They Thinking #36 The Colbys isn’t a Dynasty

What Were They Thinking #36 The Colbys isn’t a Dynasty 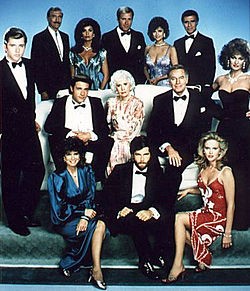 A television spin-off is where a new series is derived from an existing TV series. Usually it takes a peripheral character and spin them off into a new situational series. A perfect example is Norman Lear’s show where Maude and The Jeffersons were spun off from All in the Family and Good Times was spun off from Maude. For example, Lionel Jefferson and his parents were recurring characters on All In The Family especially when his parent bought a house on Archie’s block. When they moved to their own show, they moved up in a deluxe apartment in the sky and it was a show that was its own. Sure, George may be as loud mouthed and bigoted as Archie Bunker, but The Jeffersons stood on its own and was not a carbon copy of All In The Family.

When the nighttime soap opera Dallas spun-off the minor characters of Gary and Valene Ewing to a soap opera called Knots Landing, a cul-de-sac in California was a far cry from the Southfork Ranch in Dallas. Knots Landing was so successful, it ended up lasting one season more than Dallas.

ABC’s answer to Dallas was Dynasty. Premiering in 1981, Dynasty was considered a Dallas knockoff, but it finally beat Dallas as the #1 show in the 1984-1985 TV season. So it came as no surprise that a spin-off was in the works. The idea was to take the characters of Jeff and Fallon Colby and send them off to California where Jeff could work for his uncle, Jason Colby. Fallon at the time was presumed dead as Pamela Sue Martin had left the show. The show decided to recast Fallon with Emma Samms, who looked nothing like Pamela and had a British accent. In order to cast what was originally called Dynasty II: The Colbys, producer Aaron Spelling spared no expense and broke the bank by casting Charlton Heston as Jason Colby, Barbara Stanwyck as his sister Constance, and Katherine Ross as Jeff’s mother, Francesca. Stephanie Beachem was cast as Sable Colby who was both Jason’s wife and Francesca’s sister except Sable had a British accent and Francesca did not. The Sable character was considered the villain of the show and was constantly compared to Joan Collins’ Alexis Carrington on the original Dynasty. Maxwell Caulfield, Tracy Scoggins, and Claire Yarlett played the three children of Jason and Sable Colby.

When they originally called The Colbys, Dynasty II, the producer unwittingly tipped their hand. The Colbys was a carbon copy of Dynasty. Instead of being about a family involved with an oil company in Denver, this was a family involved with a conglomerate in Los Angeles. The show didn’t stand on its own and did bear a striking resemblance to its original. Heck, the credits for The Colbys looks the same as Dynasty. Another problem is when you have to pay stars like Charlton Heston to be on a television series, the cost for producing The Colbys was around $2 million, which was extremely expensive in 1985. While the show had a successful premiere, being scheduled against Cheers and Night Court didn’t help out. It finished #35 in the ratings. For season 2, it finished #67 and was cancelled. It was probably a good thing as the cliffhanger for Season 2 was Fallon being abducted by a UFO.

The Colbys was an expensive flop because it decided to copy Dynasty’s DNA rather than just using a pair of chromosomes and starting something new and fresh. A successful television spin-off can’t be a clone.