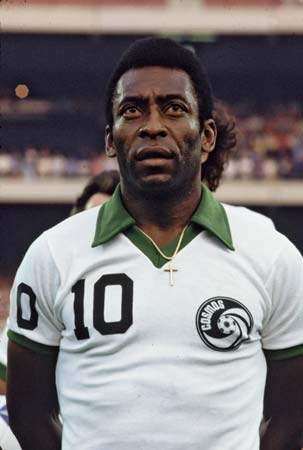 Soccer is the most popular sport in the world, just don’t count the United State as part of that world. While soccer is very popular as a youth activity, it’s never been able to establish the top 4 sports when it comes to the professional level.

While Major League Soccer (MLS) has been in an existence for 20 years, it’s never had the popularity that the old North American Soccer League (NASL) for a short period of time in the 1970s. Yet the MLS learned from the NASL’s mistakes and that’s why it still here after 21 years, while the NASL lasted only 16.

The NASL was formed in 1968 and for the first 7 years of its operation, it was essentially nothing more than a semi-pro league. The league started with 17 teams and only had 9 by 1973. Expansion brought some more franchises in and the New York Cosmos created the biggest splash by signing Brazilian legend Pele. Like when the United States Football League’s New Jersey generals signed Heisman Trophy Winner Herschel Walker where every team wanted its own superstar, NASL teams opened up their checkbooks and went crazy. The Los Angeles Aztecs signed Manchester United legend George Best and Dutch legend Johan Cruyff. Other teams signed foreign stars and the problem was that many teams could ill afford to spend heavily. With many teams in bad financial shape, NASL like other failed leagues did what failing leagues shouldn’t do: expanding the number of teams. While the expansion fees sustained the league for a few years, the overspending forced the league to contract from 24 teams in 1980 to 9 teams in its final season in 1984. The new teams only prolonged the bleeding because the league failed to vet whether the new franchises had the pocketbooks to sustain immediate losses. When NASL teams were spending 70% of their budget on player salaries, it’s a no-brainer what killed the league.

Another failure of the NASL was to properly train and grow U.S. born players, which would have been a cheaper alternative than sighing high priced foreign players.

What eventually doomed the league was the awarding of the 1986 World Cup to Mexico, awarding the United States the 1986 World Cup in 1983 might have created enough interest in soccer to save the league. How do we know? Well the 1994 U.S. hosted World Cup created enough interest that the MLS is still here after 21 seasons. The MLS learned from the NASL’s mistakes by operating as a single entity, instituting a salary cap, and limiting expansion.

The NASL failed in 1984, but one could say that the future success of the United States in securing World Cup berths and the sustainability of the MLS came out of the ashes of the MLS.