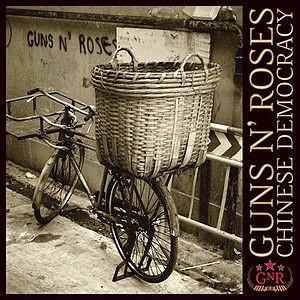 Guns N’ Roses was one of the most successful rock groups in the late 1980’s and early 1990s. Unfortunately due to a schism between lead singer Axl Rose and band members Duff McKagan and Slash led to a long hiatus of the band after the release of the covers album The Spaghetti Incident? In 1993. Slash, McKagan, Matt Sorum, and Gilby Clarke al left the band. Rose and keyboardist Dizzy Reed were the only band members left.

Rose filled out the band with multiple replacements as he started work on the next album, called Chinese Democracy. Work on the album started in 1997. After 10 years and $13 million spent, the album was ready for release. No one thought the album would ever be completed and at $13 million, it was the most expensive rock album ever produced. $13 million was a lot of money for Geffen to recover and it would have to sell several million copies to recover that money. It would be extremely hard especially in the days of iTunes and torrent sites to sell that many copies. To boost album sales, many rock music groups started exclusive deals with certain retailers to sell their newly released albums in exchange for guaranteed album sales and promotion. The Eagles were very successful with the Wal-Mart exclusive selling of The Long Road to Eden and Kiss and AC/DC also did well with Wal-Mart exclusive releases in terms of sales. Guns N’ Roses management at the time was Irving Azoff who was a long time manager of The Eagles, so he knew a thing or two about retailer exclusively sold albums. What was never explained is that Guns N’ Roses decided to cut an exclusive deal with a retailer, but not with anyone with the size of a Wal-Mart or a Target. They didn’t try to cut a deal with Amazon. Instead, Guns N’ Roses cut a deal with Best Buy. Not to knock Best Buy, but it’s not Wal-Mart or Target, it’s not even K-Mart. It’s a dying electronic store chain that is slowly turning into a showroom for people who buy electronics on Amazon.

Best Buy didn’t have the size and budget to properly promote Chinese Democracy. The biggest promotion for the album was a disjointed Dr. Pepper campaign to offer everyone a Dr. Pepper when the album was released. The campaign felt more like a viral marketing goof with no input or collaboration with the band. It ended up being a good when their site crashed and people didn’t get free Dr. Pepper. Best Buy bought 1.3 million albums from Geffen and with limited promotion, that’s about all that was sold. 1.3 million is more than The Spaghetti Incident? but a lot less than the combined 14 million sold of the Use Your Illusion albums. Exclusive deals with retailers for albums isn’t a bad idea, it just really depends on the retailer and the promotion offered for it. Chinese Democracy was a decent album, it’s just that Best Buy wasn’t the retailer to get it in the hands of the fans that needed to hear it.