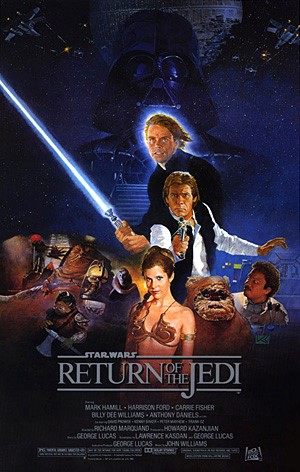 I’ve always felt like the outsider at times. I’m a Mets fan in a Yankees city and I’m not one who is watching the TV show everyone else watches. When it comes to longtime film series, my favorite film tends to be the one that most people don’t see as the greatest of the bunch.  Here are a few examples:

The Star Wars movies: I’m in the minority of fans who think that Return of the Jedi is the greatest Star Wars movie of all time. People hate on Return of the Jedi because of the Ewoks, but it’s my favorite movies because it’s all about redemption. When A New Hope came out in 1977, everyone thought it was about Luke Skywalker and his need to find himself in the world. The fact is that the original trilogy and the prequels are really all about Anakin Skywalker as he turns to the dark side and finally redeems himself.  I believe in the power of redemption and there is nothing more satisfying to see a dying Anakin tell his son that despite what everyone said (Obi-Wan and Leia), Luke was right that there was something good left in his father. Luke fulfills his destiny by facing his father, but the hero is Darth Vader as he saves his son from the Emperor. Anakin/Darth fulfills his destiny by bringing balance to the force. Sure it took almost killing the entire Jedi order, but Anakin did bring balance by decimating the Sith.

The Rocky Movies: If you ask most people, they’ll say Rocky III because of Klubber Lang and those two fights. My favorite movie out of the series is Rocky II.  Rocky II is also a story of redemption, heck it’s the title of the theme for the movie (I know this as I used to play it when I walked past the offices of a former employer). What makes Rocky II special is the end of the second fight with Apollo Creed and Rocky gets up at the count of 10 from the double knockdown. Rocky proves that he is no fluke and it’s a nice culmination for the struggles he went through in the second film as he learned that fighting might be the only thing he’s good at.

The James Bond movies: I’m sure people point out Goldfinger as the greatest, but I say Casino Royale. After the horrendous Die Another Day with Pierce Brosnan, the Bond producers wisely went back to the drawing board with Daniel Craig as a rebooted Bond, who just joined MI6. As a new agent, he doesn’t have the confidence of his superiors, so most people think he’s in over his head at the tables at Casino Royale. There aren’t crazy special effects or silly gadgets, it’s Bond at his basic. I think Casino Royale owes a debt of gratitude to Chris Nolan’s Batman Trilogy as it took its cue on how to reboot a character just like Nolan showed a stripped down, more reality-based Batman in Batman Begins. The movie also features Eva Green’s Vesper Lynd who was the original Bond girl as Casino Royale was Ian Fleming’s first Bond book.  Vesper is no eye candy like most Bond women, she is probably the strongest and most multi-dimensional Bond girl since Diana Rigg;’s Tracy from the underappreciate One Her Majesty’s Secret Service.

Dirty Harry movies: People will say the original is the best because of the Scorpio character and the freshness of the Harry Callahan character. For me, the best is The Enforcer. What makes the Enforcer my favorite is the political incorrectness of the movie. Harry gets a female partner after embarrassing her during her interview when he was demoted in personnel because Harry thought there is a high cost of being stylish by pushing women detectives who might not be up to the task. It also pokes fun at Black Power groups and a violent hippie militant group. When Captain McKay tells Harry that the minority community is upset with police tactics and Harry wonders if the minority community means the hoods and criminals. You can’t make a politically incorrect movie like this anymore. Tyne Daily is also perfect as Detective Moore because she can go toe to toe with Dirty Harry.