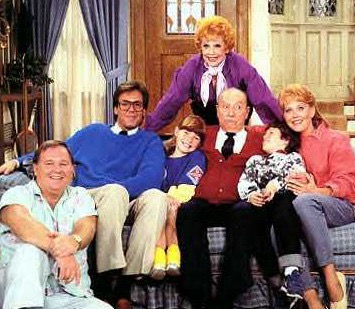 I always say that you should quit while you’re ahead. So when I passed the California bar exam after three torturous days in Long Beach taking the exam, I decided to retire from taking bar exams with an undefeated 3-0 record.

Lucille Ball is the first lady of TV comediennes. Her work with then-husband Desi Arnaz on I Love Lucy was legendary and is still considered one of the top five greatest show of all time. Even after divorcing Dezi, she showed that she wasn’t a flash in the pan as The Lucy Show and Here’s Lucy lasted a combined twelve years, ending her run as a sitcom star in 1974.

Instead of resting on her laurels and concentrating on a film career, Lucy tried a TV series comeback in 1986 at age 65. The show was called Life with Lucy and it was going to be produced by Aaron Spelling at Spelling’s home at ABC, which was a break with Lucy’s longtime affiliation with CBS.

ABC was mired in last place at the time and with Lucy’s track record, they thought this was a sure thing. Most people thought that the show was a can’t miss as Lucy would reteam with her co-star from her post Desi shows, Gale Gordon. In the end, 13 shows were filmed and only 8 were aired. The show was killed in the ratings by Facts of Life and was the lowest rated sitcom for the 1986-1987 TV season. The very first episode, aired on September 20th finished 23rd in the ratings. That means that people who watched the show never wanted to watch it again. I was one of those people who tuned in that night and what I remember is that I didn’t laugh once.

What worked in 1956 and 1966 didn’t mean it would work in 1986. While Lucy was offered the chance to work with top TV writers, she decided to bring in writers that she had worked with on and off since 1948. Rather than get some younger TV writers with a fresher perspective, Lucy leaned on writers that had worked with her on three hit TV shows. The bigger problem is that there was no interference by the network in the production of the show and there were no test screenings. I’m sure test screenings would have shown that the show was going to be a flop.

In the show, Lucy played a widowed grandmother who had inherited her husband’s half-interest in a hardware. The other half was owned by his partner played by Gale Gordon. The partners were also in-laws, Lucy’s daughter was married to Gordon’s son, and all of them, along with their young grandchildren, lived together. What should have been a hilarious situation comedy wasn’t funny at all and it didn’t help that the supporting cast except for Gale Gordon was weak.

Supposedly, Lucy was devastated by the quick cancellation of the show and some speculate that it led to her untimely death in 1989. Like other TV legends like Dick Van Dyke, Ted Danson, Michael J. Fox, and Mary Tyler Moore, it’s hard to have a perfect record as a situational comedy star.