What Were They Thinking #45 Where’s Herb? Who Cares?

What Were They Thinking #45 Where’s Herb? Who Cares? 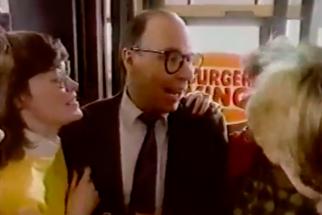 The 1980’s were a very competitive time for fast food restaurants. Wendy’s caught lightning in a bottle with the Where’s the Beef? Ads. The Where’s the Beef ads starring Clara Peller was such a cultural hit, it became a line in the 1984 Democrat Presidential Debate when Walter Mondale asked Gary Hart where the beef of his campaign was. They even sold Where’s the Beef? chewing gum.

Burger King felt the need for buzzworthy advertising since mocking McDonald’s over frying their burgers instead of the flame-broiled Burger King Burgers didn’t increase sales. So in 1985, their advertising developed the Where’s Herb? Ads. Who was Herb? Herb was described as never having eaten a Burger King burger in his life. The call to action from those ads was for fans to visit their local Burger King in the hope of finding Herb and winning a prize. The campaign also included an “I’m not Herb” promotion, in which customers could get a 99 cent Whopper by including the phrase in their order. The problem was that for the first coupe of months of the promotion, no one knew what Herb looked like. By the time his appearance was revealed during Super Bowl XX, many people had already lost interest in the campaign. Pretty soon after that, the ad campaign was over and Herb made an appearance at Wrestlemania 2 in April 1986 before disappearing for good.

The $40 million campaign was such a flop that Burger King’s profits were 40% less. The reason the campaign was such a flop was that there was no relevant message that tied Herb with the food at Burger King, it was more of a sort of Where’s Waldo? Campaign more than anything else. The buildup and the appearance of Herb finally just let the air out of a campaign that was already dying. People go to particular fast food restaurants for the food, not for some gimmick character. Herb is just a younger version of that creepy Mr.Six character in the old Six Flag ads, but the difference was that Mr. Six was popular.