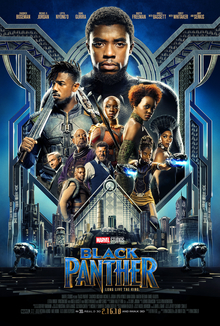 About 18 years ago, I used to go to the local comic book store for my weekly read of comic books. One week, I was excited because they were going to release a new Black Panther book. The store owner didn’t give much hope for its success because he claimed that Black Panther wouldn’t sell because the Black Panther was an African King of Wakanda. I’ve always been a fan of the Black Panther because he’s got an amazing looking costume and the character is unique as he’s the King of a well developed African country.

I was so happy to hear Marvel was developing a movie and that he would appear in Captain America: Civil War. There was a Black Panther movie in development for years and they finally got it off the ground. Chadwick Boseman’s take as King T’Challa/Black Panther in Civil War only makes me want more with a standalone Panther movie. Marvel Studios really strives for quality and they made sure that the standalone movie would be done right and they hired Director Ryan Coogler to write and direct, coming off his amazing movie called Creed.

Black Panther is an amazing movie and probably one of the top 5 superhero movies ever made. What makes it stand out is the unique look of the movie especially with how technologically advanced that Wakanda is despite the world thinking it was just a third world country. Michael B. Jordan’s role as the villain, Killmonger, is one of the great superhero villain performances. Most villains are rarely developed and single dimensional, Killmonger sees himself as a revolutionary, reminding me of the Black Power group that took its name from Black Panther.

I can’t wait for Black Panther to return in Avengers: Infinity War.