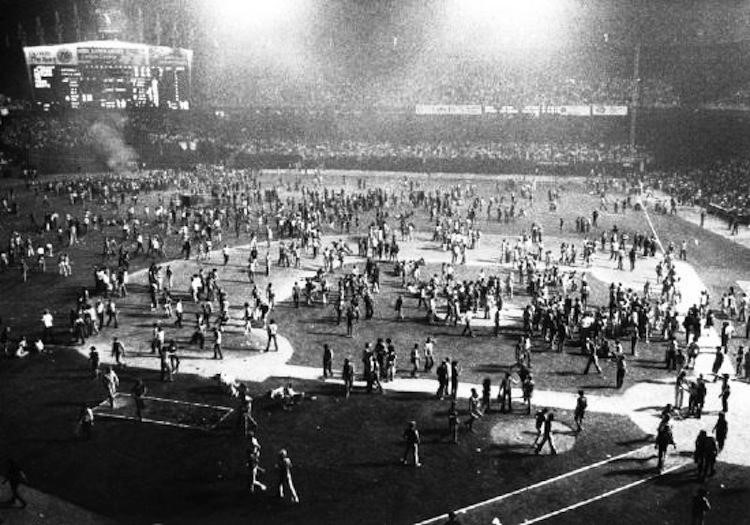 Promotions by sports teams is a great way to entice fans to go to the game. I know this because my son has penciled in all the bobblehead giveaway games for our New York Mets.

In the 1970’s, the Cleveland Indians weren’t exactly the hot tickets as their teams were rarely good and Cleveland Municipal Stadium wasn’t exactly Fenway Park. So to pack them in, the Indians offered Ten Cent Beer Night on June 4, 1974. This wasn’t the first time the Indians ran this promotion; they had a Nickel Beer Night in 1971.

The promotion was a pretty good bargain for fans. The promotion would offer a 12-ounce draft for ten cents when it normally went for 65 cents (I just bought a Corona Draft at Barclays Center for $13 a few weeks back). There was a limit of six beers per purchase but with a limit on the number of purchases made during the game.

The game on June 4, 1974, was against the Texas Rangers and the problem was that they had a bench-clearing brawl with the Rangers a week earlier in Arlington. There was no brawl during the game on June 4, 1974, but there was already tension in the air. Texas pitcher Ferguson Jenkins was spiked by Indian Leron Lee and had to leave the game. The tension as exacerbated by drunken fans who were running on the field including one female fan who flashed her breasts on the on-deck circle. With the game tied 5-5 in the bottom of the ninth, a fan ran on to the field to attempt to steal Texas outfielder Jeff Burroughs’ cap. Burroughs tripped and thinking that he was attacked, Texas manager Billy Martin charged the field with his players carrying bats, the Indians followed as well. The problem was that some fans carried weapons and were throwing folding chairs and bottles from the stands. Both teams returned to their clubhouses as the bases were pulled up from the ground by fans and the umpires couldn’t restore order, especially after a chair and a rock hit the umpire crew chief. The Indians were forced to forfeit the game.

Selling beer at a discount isn’t a great idea because many people love their beer and would take advantage of a situation and they don’t call alcohol, liquid courage for no reason.

The most amazing part of the story that people don’t mention is that after the riot, the Indians still had another Ten Cent Beer Night. A month later, they offered ten-cent beers, but only two at a time instead of six. So they might have learned their lesson.