What Were They Thinking #49 Coors Sells Water Without The Buzz

What Were They Thinking #49 Coors Sells Water Without The Buzz 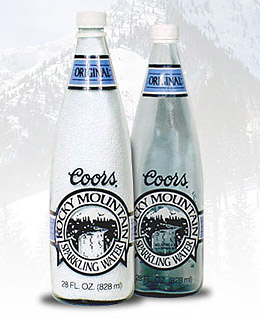 If a food or beverage manufacturer is successful with a brand or segment of the market, they’re always trying to come up with a spinoff product. That’s why you’ll see Oreo cereals and ice creams and other baked goods. As I discussed in a previous article, it’s a mistake to have one product that has nothing to do with your business and might leave a bad taste in the mouth of consumers (Colgate Frozen Dinner Entrees). While some products may look good on paper because it’s just an outgrowth of what they do, sometimes they’re just awful ideas like Coors Sparkling Water.

I’m a beer snob, so like my favorite bar near my home, Croxley’s, I don’t serve or consumer, Coors, Miller, and Anheuser Busch. I think those beers are just malted water and I like beers that taste, good. So I stay away from the big 3 and concentrate on the small craft brewers (even though Samuel Adams isn’t really small).

For a good part of its history, Coors was considered an exotic brand of beer because there was a time that you couldn’t get it east of the Mississippi. Heck, the plot of the first Smokey and The Bandit dealt with the illegal shipment of Coors beer from Texas to Georgia. It was the beer version of In-N-Out Burger, but less so, when you actually drank Coors.

Coors’ big advertising push into the Eastern part f the United States focused on its use of Rocky Mountain water into its beer and if you’re a beer aficionado, you know that water has nothing to do with a beer being good. For most beer drinkers, they don’t know that and that’s why Coors was successful with its national rollout in the 1980’s. The 1980s also dealt with an explosion in the sale of bottled water, so Coors thought that offering a bottled water product might be a great idea since water was such a strong marketing component of its beer and it wouldn’t cost them much to go from brewing beer to bottling water.

So in 1990, Coors came up with Coors Rocky Mountain Sparkling Water in Lemon Lime and Cherry flavors. While using the Coors name might have made sense from a marketing standpoint by using a well-known brand name, the name was associated with beer. So I’m sure many consumers thought that the water might be loaded with alcohol, sort of like a Zima or other malted liquor beverage. The bottle had a big Coors logo, but not a big non-alcoholic label. How many people didn’t buy the water because they didn’t want the assumed buzz? No one wants to get a DWI arrest for drinking H20.

Is it any surprise the product failed? Nope.