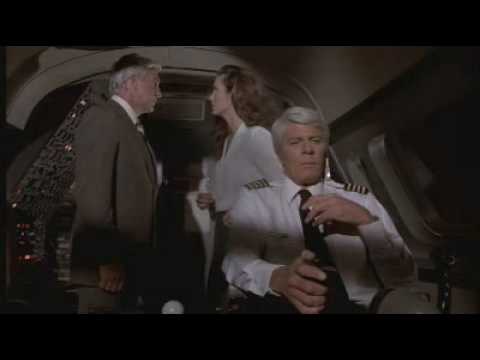 This is the first of hopefully (depending on continuing advertising support) of many articles on some of my favorite things in entertainment and everything else unrelated to 401(k). So the first article has to do with my favorite movie since I was 9 years old: Airplane!

I first saw Airplane! after it started airing on HBO and it’s been a favorite of mine ever since, even if I didn’t understand all the one-liners (like the Anita Bryant concert reference).

I think it’s one of the funniest movies and it’s the one comedy that doesn’t really play for laughs. It’s a spoof and everyone delivers the line as if it was a serious drama. That’s why the Zucker brothers and Jim Abrahams cast actors like Leslie Nielsen, Robert Stack, Peter Graves, and Lloyd Bridges, who were known for deadpan deliveries and limited emotional rage. While everyone now associates Leslie Nielsen with Airplane! and Naked Gun, check out Leslie as the ill-fated Captain of the Poseidon in the Poseidon Adventure. Have you ever seen a character with such little emotion?

The movie is comedy gold because it plays like a serious disaster movie while absurd things happen. The Airport movies such as Airport 1975, 1977, and 1979 were ripe for a spoof. The funniest part of Airplane! that most fans don’t know is that it’s an actual spoof of the 1957 movie Zero Hour! For many parts, it’s word for word using the same screenplay as Zero Hour! Which required the Zuckers and Abrahams to purchase the rights to Zero Hour!

In Zero Hour!, Ted Stryker, a war veteran with PTSD for losing much of his squadron in World War II has to save the passengers when the flight crew is incapacitated by eating bad fish. Instead of Elaine, the stewardess having left him, Ted has a wife named Ellen who is trying to leave him. The reason that Kareem Abdul Jabbar is the co-pilot in Airplane! (a role that was supposed to go to Pete Rose, but filming was done during baseball season) is because Rams Hall of Fame Running Back “Crazylegs” Hirsch is playing the pilot in Zero Hour!

There are scenes that are the direct spoof of Airport movies especially Maureen McGovern spoofing the Helen Reddy played a nun in Airport 1975 who sings to the sick girl Linda Blair, which is spoofed in Airplane! by Love Boat daughter Jill Whelan.

The late Stephen Stucker steals the movie as absurd air traffic controller Johnny Jacobs. Every scene he’s in is owned by him.

Where else can use see Barbara Billingsley speak jive or Peter Graves playing a creepy pilot?

My favorite line in the movie isn’t one of the funniest ones like “I am serious and don’t call me Shirley.” My favorite line points to the absurdity of the serious tone of the movie. Having been told by Elaine that the choice for dinner was steak or dinner, Leslie Nielsen’s Dr. Rhumack remembers that he had the lasagna.

Airplane II isn’t half as good as the original because the Zuckers and Abrahams weren’t involved and it seemed to be a rerun of the original.