What Were They Thinking #50 the AOL-Time Warner Merger

What Were They Thinking #50 the AOL-Time Warner Merger 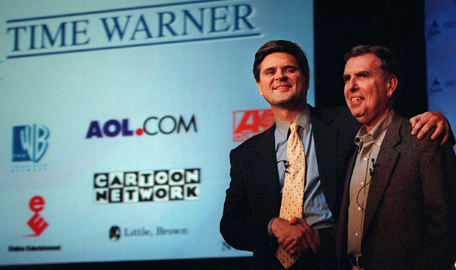 There have been so many bad mergers in corporate history, but there is probably no worse corporate merger than the one that had American Online buy Time Warner.

America Online merged with Time Warner in a deal valued at a stunning $350 billion in 2000 and it was doomed from the start because it really was a bad idea. While the stock market was going through an internet boom, there was an idea that the Internet would overtake printed media. While print media has been dying a slow death, that wasn’t the case in 2000.

When the deal was announced on January 10, 2000, AOL’s stock value was double of Time Warner and would end up buying Time Warner even though Time Warner had double the cash flow and better assets like Warner Brothers, Time Warner Cable, and the Turner cable networks.

The idea was that by merging with AOL, Time Warner would reach deep into the homes of tens of millions of new customers. AOL would use Time Warner’s high-speed cable lines to deliver to its subscribers Time Warner’s branded magazines, books, music, and movies.

The merger was a poorly timed idea because while AOL was the leader in Internet service, dial-up connections that AOL mastered was going to be obsolete with broadband Internet delivery by the cable and telephone companies. Thanks to broadband and thanks to cutbacks in advertising, AOL’s revenue, and the stock price fell down t earth not long after the merger. The loss of revenue caused AOL Time Warner to report a loss of $99 billion in 2002 — which at the time was the largest loss ever reported by a company. The total value of AOL stock subsequently went from $226 billion to about $20 billion. Many expected synergies between AOL and other Time Warner divisions that never materialized, which was the selling point of the merger.

AOL was such an albatross both politically and financially,they dropped AOL from their name in 203 and spun them off as a separate company in 2009.