I’m only superstitious about the Mets

I’m only superstitious about the Mets 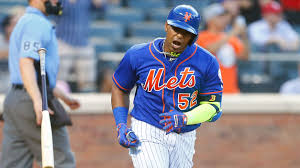 When I was younger, I used to be superstitious. For example, in college, I had a lucky shirt. It was from the Gap, it was a blue long-sleeved shirt with images of what looked like a coat of arms. My average in college with that shirt was probably an A-, I also ended up wearing it for two of my bar exams which I passed both. I still have that shirt, but I no longer wear it since it’s out of style and I’m 30 pounds heavier.

I will open an umbrella inside and a black cat doesn’t phase me, but any talk about how great the Mets are doing these days has me telling them not to jinx them.  My grandmother was very superstitious and she would always say that if you talked about something nice, you were putting a “Kneina Hura” (jinx in Yiddish).

I follow sports broadcaster Bonnie Bernstein on Twitter and when she said great things about her Mets, I tweeted back that she shouldn’t jinx it. I’ve seen enough heartbreak since 1986 that I’m just waiting for the bottom to drop out when people say great things about the Mets. Aside from ’88, ’99, ‘00’, ’06, ’15, and ’16, it’s been mostly losing and zero World Series titles since 1986. So please understand my superstition about the Mets.