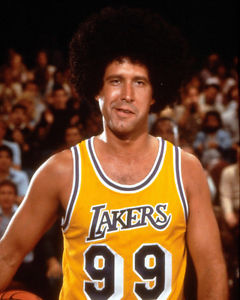 My favorite movie of all-time, but Fletch, the 1985 comedy classic starring Chevy Chase comes in second place.  What makes this a classic in my mind, well one scene for me defines it.

Fletch is trying to get the name of Alan Stanwyk’s realtor in Provo and he does it by claiming that Frieda (a name he made up) lost the number and he asks the secretary at Boyd Aviation for it. After she gives him the number, she

Madeline: I’m sorry, who are you again?

Fletch is a comedy, based on the series of books by Gregory McDonald on Irwin M. Fletcher (“Fletch”), who is an investigative newspaper columnist under the pseudonym of Jane Doe. The movie is a series of what seems to be unrelated events: the proliferation of drugs on the beach and Alan Stanwyk who claims to be dying of cancer who hired Fletch to kill him, thinking Fletch is just a beach bum.

Rather than give up the whole entire movie, you should watch because it’s Chevy Chase at its best and the best screenplay that Andrew Bergman ever wrote (even though he had a hand in writing Blazing Saddles). The script is smart and perfectly sarcastic. Fletch pretends to be a doctor and faints during an autopsy. When he comes to, he claims the spleen was a spitting image of his brother’s.