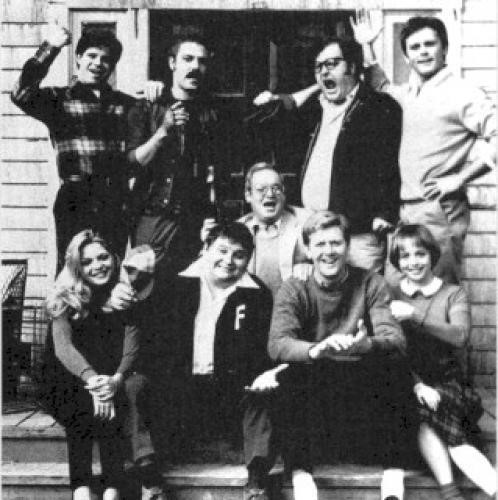 Television networks’ record in developing successful television shows from movies are as bad as the Cleveland Browns’. For every M*A*S*H, Friday Night Lights, and Alice, there are dozens of Ferris Buellers, Fast Times at Ridgemont Highs, and Nothing in Commons.

In 1978, National Lampoon’s Animal House became a huge box office comedy hit. So rather than cashing in with a sequel, producers Ivan Reitman and Matty Simmons followed up with a series on ABC that lasted 13 weeks but did introduce the world to Michelle Pfeiffer.

First off, the name of the series that debuted in 1979 and was based on Animal House wasn’t called Animal House, it was called Delta House. Even though it starred four actors who were in the original movie, they changed the name of the show which would the show invisible to many of the fans of the movie who wouldn’t be aware that the show was based on the movie. The dour actors reprising their roles were John Vernon (Dean Wormer), Stephen Furst (Flounder), Bruce McGill (D-Day), and James Widdoes (Hoover). Josh Mostel was added to the cast as Blotto, which was Bluto’s brother since Jim Belushi was busy making movies.

The show was doomed to fail because it’s hard to adapt an R rated movie dealing with drugs, sex, and raunchy humor into a network sitcom broadcast during the 8 to 9 pm hour on weeknights. It’s like taking an R rated movie and trying to broadcast it on regular TV with dubbing and editing out any of the “dirty” words. What made Animal House was its raunchy humor and when you water it down for broadcast TV, it doesn’t work. But, Michelle Pfeiffer played a character called the Bombshell. So it’s nice that this show and Grease 2 didn’t doom her.