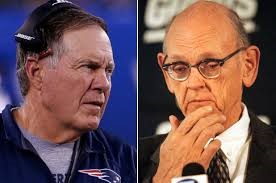 I’m a fan of Bill Belichick, probably because he was the defensive mastermind of my New York Giants in the 1980s and early 1990s that led to two Super Bowl championships. His defensive game plan against the Buffalo Bills for Super Bowl XXV sits in the Pro Football Hall of Fame. While Belichick has now won 6 Super Bowls as a head coach, he had to get past some obstacles.

While Belichick was a well-respected assistant for coaching legend Bill Parcells, for some reason or another, Giants General Manager George Young hated Bill Belichick. Young claimed that Belichick would never become Giants’ head coach on his watch because he thought Parcells had lousy people skills, dressed like a mess and because Belichick was a former lacrosse player in college. George Young thought Ray Handley was a better fit and history showed what a disaster Handley was after replacing Parcells who left the Giants after Belichick left to take over the Cleveland Browns head coaching job.

Speaking of the Browns, Art Modell who owned the Browns hired Belichick even after George Young took the extraordinary step of trying to talk Modell out of it. Imagine working for a boss who not only wouldn’t recommend you for a promotion but actually called a potential new employer to bury you. Belichick’s struggles as Browns’ coach proved Young right initially, but 6 Super Bowl wins later, now question Young’s status as a Hall of Fame member.

Whether you di anything wrong or not, there may be one or two people in your career that may try to plot against you. They might be co-worker or supervisors, whoever they are, they may not like you for one reason or another. As you know as a kid, not everyone is going to like you and how you handle these terrible relationships will say more about you than them. I had two people in my career that either didn’t like me or actually called other retirement plan professionals to speak badly about me. One person is still mocked in my articles because I think she couldn’t see the future if it was right in front of her (sorry Lois) and the other one, is now one of my best clients. There are those who may not like you, but you just have to deal with it. You can persevere as long as you have talent and the ability to learn from your mistakes, just ask Bill Belichick.