The problem with WrestleMania

The problem with WrestleMania 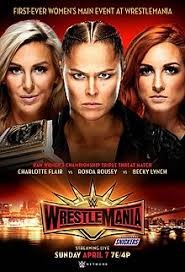 WrestleMania 35 will be next weekend at Met Life Stadium in East Rutherford, New Jersey. Since 1985, it’s been the Super Bowl of wrestling, but now it’s starting to resemble the Academy Awards, a bloated spectacle that is driving away the audience with a product that has lost touch with its fans.

As of now, there are 14 matches and if you include the pre-show that has matches will be about 6 hours in length, that will certainly tire out even the most hardcore of fans. The problem with WrestleMania is that it’s such an institution that it sells itself, that what’s on the card that no longer matters.

This year’s card will be a first as the women’s match between Rhonda Rousey, Becky Lynch, and Charlotte Flair will be the main event. The reason it’s the main event because it’s been the best-booked match on the card and has carried the fan’s interest. Other matches like Brock Lesnar taking on Seth Rollins or Daniel Bryan taking on Kofi Kingston in a racially tinged storyline isn’t lighting the wrestling on fire with interest.

The best WrestleManias, like the best booked WWE, was when there was competition with WCW. Now, the WWE has a bloated roster with little interest in building new stars and concentrating too much time on part-timers like Batista and Triple H. Even Colin Jost and Michael Che from Saturday Night Live participating in the Andre the Giant Memorial Battle Royal has done little to draw mainstream interest,

The problem is that there is very little connection between many of the star wrestlers and the audience. What Becky Lynch has done in getting over with the crowd and in line to probably defeat Rhonda Rousey has been done without the support of the powers that be who are still trying to make Roman Reigns a star where his remission from leukemia might be the only way he gets popular with the audience.

That’s why I support the creation of All Elite Wrestling, it won’t beat WWE at all, but serious competition might spur WWE to get off their creative rear end and start booking interesting angles and allowing some of their younger NXT to connect with an audience on a bigger scale.