Kauffman Stadium was ahead of its time

Kauffman Stadium was ahead of its time 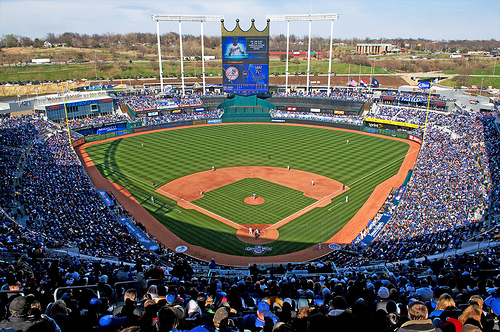 As a kid growing up in the ’70s and ’80s, there was something special of watching a game on television seeing the Royals play at what was then called, Royals Stadium. Royals/Kauffman Stadium was built in 1973 and it was ahead of its time because it stood out among the stadiums built in that time frame? Why? The folks in Missouri had the foresight to build separate stadiums for the Chiefs and Royals when it was in vogue to build one multi-purpose stadium to house a football and baseball stadium. Kauffman Stadium was the last baseball-only park built in the majors (not counting temporary facilities) from 1966 to 1991. It was built during the time of Shea Stadium, Veterans Stadium, Riverfront Stadium, and Three Rivers Stadium. While Kauffman Stadium still stands, those cookie-cutter stadiums are no more.

The addition of a natural grass field and seats in the outfield have only augmented the look and feel of a modern class ballpark. While it doesn’t have the retro look of the stadiums built after 1991 (Oriole Park at Camden Yards started the trend), I think it’s a classic ballpark because it was ahead of its time and that’s why it still stands after being built in 1973.

I recommend attending a game there and based on what I paid on StubHub for 15 rows behind home plate, it won’t break the bank.