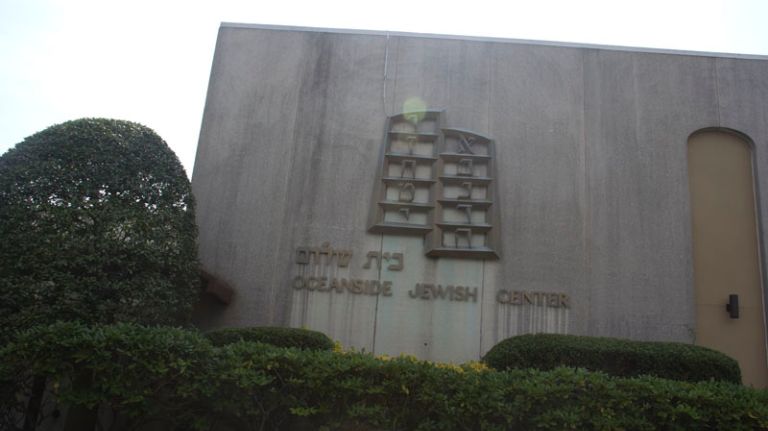 In the Rod Serling show, Night Gallery, Serling wrote the episode: “They’re Tearing Down Tim Riley’s Bar.” It was an episode lamenting the destruction of a closed bar that was being destroyed in favor of a new office building. Lamenting the destruction was a former patron who remembered how the bar shaped his life as a patron and as a place where he frequented with his deceased wife. The patron played by William Windom (later the Doctor on Murder, She Wrote) seem himself as an antique with no place in the present like Tim Riley’s Bar.

While I don’t see myself as an antique, I am lamenting the inevitable destruction of Oceanside Jewish Center (OJC), a synagogue that I first joined when I moved to Long Island and where I would quit 10 years later and whose demise I predicted. I just didn’t think it would happen so quickly.

OJC isn’t closing down its doors now, they’re just selling half their property and destroying half of their structures which includes the sanctuary where I had my auf ruf and where my son had his bris. It’s the sanctuary that has the memorial plaques for both of my grandmothers. The idea is that they will redevelop the school area as a new sanctuary while getting rid of the old sanctuary and the cocktail room. The sale of the sanctuary and the former Rabbi’s parsonage to a developer is also a problem as Oceanside doesn’t have the infrastructure to support what will likely be an apartment complex as Oceanside starts becoming a New York City borough that most of us moved to Oceanside to avoid.

OJC is the symbol of the dying Conservative synagogue. Once the most dominant form of Judaism, it’s been dying slowly as their move to be closer to Reform Judaism has left it without much of an identity and running many of the devoted members to the arms of the Orthodox movement. OJC is like every other Conservative synagogue I’ve belonged to. They have member leadership that has no vision and hasn’t developed a new idea to bring in members in the last 40 years. Conservative synagogues have been shrugging off their problems to demographics, but the problem lies with a leadership that doesn’t understand that they provide zero value to the bulk of their members. Members that leave after their kids are Bar or Bat Mitzvahed or leave to the local Chabad Center (run by the Lubavitch and doesn’t charge much in dues) aren’t doing it because they’re cheap, they’re doing it because they see no value in belonging to a synagogue. Money in middle-class families is hard to come by and spending $3,000 on a synagogue membership where families see no value is the problem. Rather than generating new idea on programs and fundraising, most synagogues like OJC rely on the same old formula of programs and fundraisers that only interest the core 30-40 members in leadership and regular synagogue attendance. They forget that the hundreds of families that don’t regularly attend services have been paying the freight for the small number of members who are actively involved. Instead of running the same religious programs and the same fundraisers, I think synagogue leadership can develop new program ideas as well as fundraising events that might engage non-members to attend. I ran a Sal the Stockbroker (from the Howard Stern show) comedy show at another synagogue that drew most of the attendance from non-members. Instead of relying on the same 30-40 members to attend, getting much-needed funds from non-members is like manna from heaven. Yet, I’ve never seen another synagogue in my area try that. Instead, they run the same journal dance that only attracts the hardcore members and those who remembers the golden era of the Conservative movement. I find the Conservative synagogue a very unfriendly place because if you just attend a Shabbat service out of the blue, very few people come up to say hello. It’s the same feeling when you walk in the building at any time.

I left OJC for family reasons, as well as the fact that I thought the synagogue was becoming more and more like Reform Judaism. When I quit, not one member called me up to reconsider. I’m sure as countless dozens and dozens of members have quit in the 10 years I left, no one called to have these

What can OJC do? I think it’s too little, too late as it seems a deal to a developer has been consummated. Quite honestly, their best move is to sell the entire property and merge with another Conservative synagogue that would be more than welcoming with open arms.